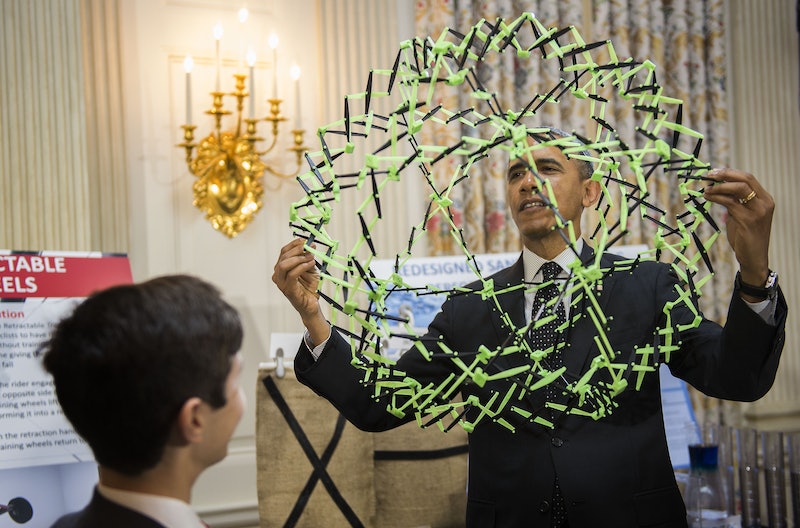 No matter what side of the aisle you fall, there's no doubt that President Obama is the most tech-savvy leader the White House has seen. After all, he's a product of the times: Technology has never in history been so pervasive in everyday life. From police work to fashion to the mobile phones in our pockets, we're tethered to our devices whether we like it or not. Now, the White House hopes to link itself to the very best tech the country has to offer. Entrepreneurs have a chance showcase their stuff on a national stage in the first ever White House Demo Day.

Submissions for the Demo Day are being accepted until Friday, April 24. (The event date is TBD.) According to its site, the White House wants innovative ideas that can change the world. The application specifically asks for people who are actively trying to grow start-up hubs across the country, train a new generation of innovators, and create communities that help connect money with talent.

The Demo Day will highlight individual success stories, particularly giving attention to underrepresented groups such as women and minorities. In a statement Tuesday, White House Chief Technology Officer Megan Smith invited entrepreneurs from all backgrounds to apply and bring their innovations to Washington.

As we work to keep our lead as the best place on the planet to start and scale big, innovative ideas, we've got to make sure more startup hotbeds emerge in every corner of America, and that those underrepresented in entrepreneurship are being tapped to fully contribute their entrepreneurial talents.

The White House first announced plans for a Demo Day early last month, and details surrounding the event have been minimal. But what we do know is that the White House is changing things up. Half final exam, half graduation, a Demo Day is typically a big show-and-tell for newbie start-ups accepted in accelerators, or mentoring programs. After months of meetings and workshops during which they get a little money to fine-tune their products, start-ups present their tech in the hopes of securing more funding from investors or maybe even piquing a buyer's interest.

That's not the goal here, the White House said, since its Demo Day will aim to showcase deserving entrepreneurs and impactful ideas. But that kind of endorsement could turn into serious press for a young company. And that kind of political vouching has never happened before.

It's a sign that Smith, a former Google exec who joined Obama's team in September, has ambitious plans on how to get the White House plugged into the latest technology. The first ever Demo Day could also be a good indicator of what kind of tech — and ultimately, the problems they solve — the White House thinks deserves the most attention. With Obama in charge, I'm putting my money on health care and clean energy. Biotech and clean tech folks better get on it.