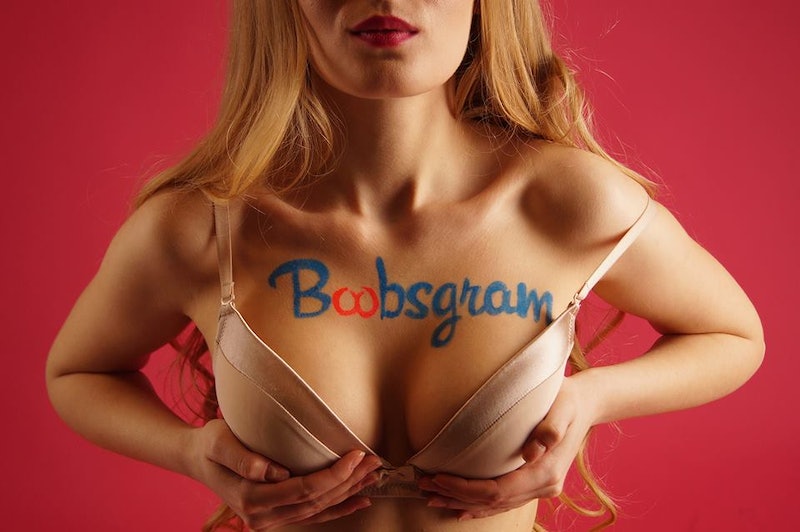 What is going on?

Well, simply put, what's going on is sexism. Specifically, we're looking at the literal objectification of women, and it's not OK. For years, women have been depicted in too many objectifying ads to count and used constantly as props to cater to the male gaze in service to a product. In some of the more disturbing examples, women have explicitly been made synonymous with the products — or even worse, been transformed into the product through the magic of Photoshop. Which is disturbing because women are not inanimate objects. We are people.

So who are the services that are doing this? Well, here are four:

The Russian pioneer of putting ads on women's boobs. Joy.

Absolute Territory doesn't just do advertisements on women's thighs; they're actually an established, high profile PR firm, but they did pioneer this territory when they started putting ads on women's thighs in Tokyo in 2013.

Though their name is anything but classy, TitStamp at least claims that part of their proceeds go towards breast cancer — so I suppose if you're going to pick a "lesser of the evils" type thing, go with this one?

This service seems to be the latest of these atrocities. We're actually not totally convinced that it might not be a joke — Livr, an app that appeared to advocate heavy drinking, turned out to be a hoax, after all, so it's always possible that this one could be, too — but even if it is a joke, it's still playing into the trend. Either way, it's not good.

So why am I so down about these services?

Well, as I mentioned above, ads have objectified women more and more over the years — so much so that now, they often literally turn images of women's bodies into objects, as we see in this ad here. I mean, she doesn't even have a face — she's nothing but a pair of disembodied boobs. Arguably, these kinds of services take this dehumanization even further by reducing women's bodies and women's sexuality down to nothing but a platform for an ad.

The premise behind the marketing is insidious and objectionable enough. It assumes that obviously people are going to be ogling women's breasts and legs, so we might as well throw some logos on there while we're at it. But by putting those ads on the women, advertisers are treating their bodies as merely a means to an end, a way of hosting an advertisement and giving it sex appeal simply by existing. Because obviously a female body is inherently sexual, right? And that sexuality can and should be used by companies, yeah? Except no. No bodies, whether female or male, are inherently sexual. End of story.

The whole thing concerns me for a number of reasons, but the one that's the most troubling is this: The women who "host" these ads are not models in a photograph or actresses behind a television screen — they are real live women walking around in public acting as mini-billboards. Apart from the obviously problematic way this reduces real women to props in the real world, not just in the fictional universe of a commercial or print ad, there's also the fact that once you dehumanize someone, violence often follows. What happens when someone who doesn't like the product or message a woman is wearing decides to get in her face? What happens when people see you as a product and you are not behind a screen?

The fact that this is becoming more common is disturbing. If this were just one service, we could maybe chalk it up to one person having a really misguided idea, but the fact that there are now at least four services who are selling ad space on women's physical bodies shows that this is not an isolated phenomenon. And that is downright depressing.

But we can do something about it, simply by not using these services. The "trend" is already out of hand, so let's not make it more of a thing if we can help it. We're all more than the sum of our parts — whether or not those parts include breasts or not.