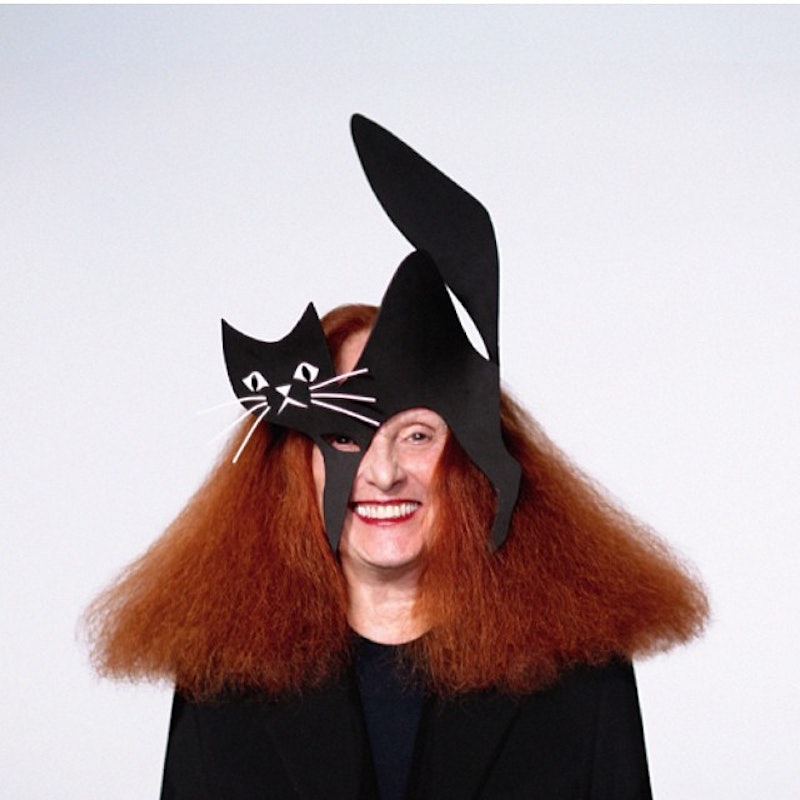 When Vogue deigns to participate in the Halloween rituals, everybody else just looks bad. Suddenly our hilariously ironic costumes and extravagant manicures seem immature, cheap, and overdone, and we realize that real grownups celebrate Halloween as though they were selecting a fine wine: They want something subtle, nuanced, and insanely expensive.

Instead of doing anything as predictable as "dressing up" in "costumes," Vogue asked designers to compose Halloween masks — the world's most alluring prop for disguising one's identity — and then asked their favorite New Yorkers to model the results. Words cannot describe the beauty. Toni Garn in a golden Philip Treacy mask. Tabitha Simmons in Dolce & Gabbana. We're pouring gasoline on our "Sexy Kale Salad" costumes and lighting them on fire.

Just look at Grace Coddington and her blazing red witch hair beneath that Steven Jones "Fashion Pussycat" mask (above) — who needs a broomstick when you're embodying the Platonic ideal of black magic? Vogue debuted a few more shots on their Instagram, causing us to weep tears of awe and envy:

Here's model Jessica Hart in a Langley Fox mask. There's something about the sparkle and the sexy cat-eye shape that tricks you into thinking this mask is pretty, almost childish — until you notice the skulls and crossbones adorning the rest.

These fraternal, genderless twins look straight out of a futuristic horror film; you know, the type of world where humans are so perfect, they're terrifying. Lanvin designed, Kelly Connor and Chelsea Zalopany of Vogue modeled; the pale, oversized shapes conjure up images of human balloons, as though the girls might float off at any minute, horribly attached to those glamorous fake heads.

Gym wear for 3013? Model Hilary Rhoda wears a mask designed by Nike, which was inspired by the Air Jordan 13 basketball, which was in turn inspired by Jordan's nickname, "Black Cat." If she and Grace Coddington wore these masks to the same party, the world would explode.

See the rest of the beauty on Vogue.com, including the Man Repeller in Warby Parker, Olivia Bee in Jean Paul Gaultier, and Olivier Theyskens in his own design.