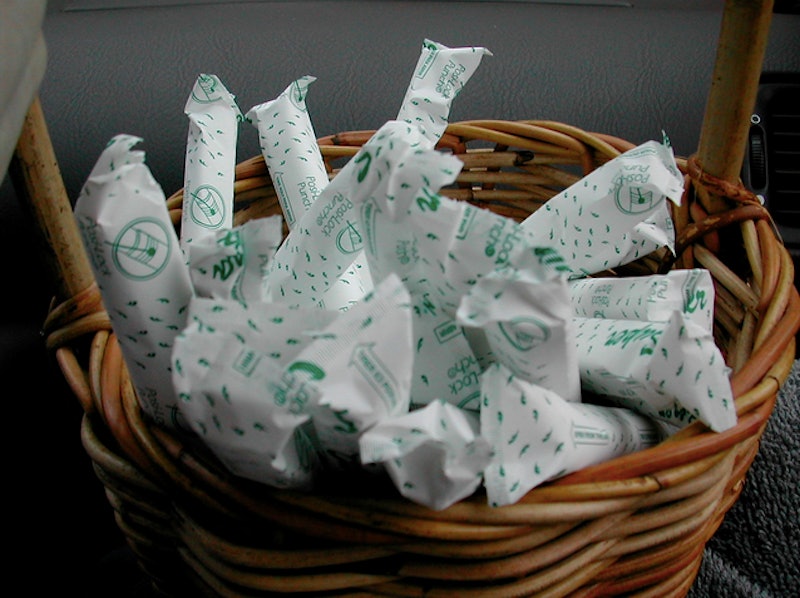 I've always wanted a little brother, but alas, mother nature never had it in the cards. I used to be bitter about it, but after all these years I finally understand that it was meant to happen so that one day I could hear about this boy who called on his male friends to bring pads and tampons to school for their female friends and just make him my Honorary Little Brother for life. 15-year-old Jose Garcia recently posted a photo to Instagram holding up two sanitary napkins in his incredibly progressive and thoughtful call to arms, with this caption expressing his feelings on the matter:

TO EVERY BOY THAT FOLLOWS ME AND CALLS HIMSELF A MAN OR SIMPLY A GOOD HUMAN BEING. Petition for all of us to start bringing a couple pads or tampons to school to help our girl friends. If you have a girlfriend or are friends with a girl, u should know that they do not always have tampons or pads on them, or that sometimes their period just hits them without notice and have a bit of a problem finding one. We should support them with this, after all, we don't have to go trough all they they do because of menstruation, so it's just logical that we help them. You should already know to give them your sweater and not question when they wrap it around their waist. So let's step it up a notch and help them out. IF YOU HAVE ANY RESPECT FOR YOUR MOTHER, YOUR GIRLFRIEND, OR JUST WOMEN IN GENERAL I EXPECT FOR YOU TO FOLLOW ME ON THIS.To every girl that follows me. You are completely welcomed to ask me for a pad at any time without receiving a negative response or a dirty look. We should all help each other out like this so you don't have to thank me at all. #realmensupportwomen

OK, well, I'm crying. Like, what a relief that this is what the next wave of human beings is ushering into the world—and that his peers are rallying behind him, with a whopping 18,000 Instagram likes so far. Not gonna lie, I was a little worried about Gen Z after all this year's promposal shenanigans, but this just warms my heart.

More to the point, though, Jose really hits the nail on the head. Some of my bleakest, most unsettlingly clear memories of high school involved ~surprise~ periods, especially since high school is that weird in between time when your cycle doesn't know what the hell it wants from your uterus yet and a lot of girls aren't on birth control yet. I spent an entire afternoon once hiding in a bathroom until my mom could bring me extra pants; on another day, the school nurse yelled at me for reaching for a sanitary napkin in the nurse's office, telling me I had to "wait in line" behind sick kids and then explicitly ask her (in front of a bunch of people that I was in classes with, no less).

What's awesome about this movement Jose has begun is that it would prevent that kind of completely unnecessary awkwardness. BRAVO on this youngster for breaking the period taboo, because the only thing worse than realizing you're on your period is getting weirdly shamed about it. I want to live in Jose's utopian sanitary napkin world where everyone, regardless of gender or menstruation status, pitches in to make the experience a little less miserable.

"My inspiration didn't come from one source only, but just from day to day things that have happened around me, like a friend staining her pants or feeling uncomfortable to ask for a sweater to tie around their waist because their pants are stained," said Garcia in an interview with The Daily Dot. "I also believe that asking for a pad or a tampon shouldn't be such a taboo thing to boys. It's a natural thing that happens to women."

Garcia goes to high school in Miami, where he has lived for the past few years since moving from Cuba. Since he posted the photo to Instagram, it's already popped up all over Tumblr and social media, where it has garnered an encouragingly strong amount of support.

"I, in fact, consider myself a feminist," he also shared with The Daily Dot. "I believe that there should be equality for everyone regardless of their sex, gender, skin color, race, religion, etc. so it would be nice to use this attention for something positive."

Unfortunately, some people who don't see quite eye-to-eye with Jose's mission. He has been bullied by classmates, as well as cyber-bullied online, by people who have called him names or made vicious comments about his post. Unsurprisingly, Jose is as cool-headed about the bullies as he is about taking a stand for his menstruating friends. Also an accomplished artist (what can't this kid do?), he took to Instagram to address the backlash.

Way to go, Jose. We've never met, but we're best friends now. And you know what they say, everyone: Keep your friends close, and keep the ridiculously cool friends who carry spare pads around with them WAY CLOSER.