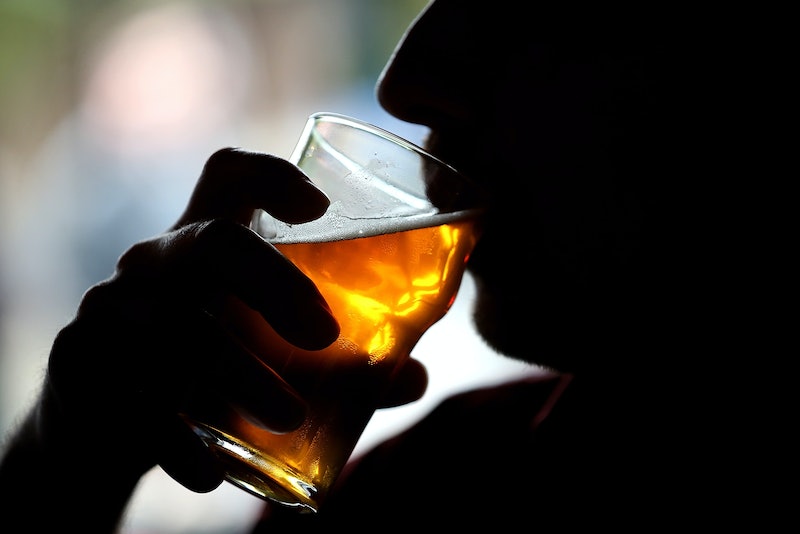 Ever have one of those days at work where the ONLY thing you can think about is high-tailing it to the nearest bar and going nuts on a few happy hour margaritas? Of course you have — it happens to all of us. But according to new data, certain professions produce heavier drinkers than others, and the jobs with people who are most likely to drink or use drugs may surprise you.

As reported by the Washington Post, research released by the Substance Abuse and Mental Health Services Administration breaks down which industries employ people who are most likely to use substances. When it comes to heavy drinking, defined by this study as having five or more drinks in one sitting five or more times in the last 30 days, mining takes the top slot, with 18 percent of miners identifying as heavy drinkers. Construction came in close second with 17 percent of workers falling under the heavy drinking category, and the hotel and restaurant business rounded out the top three at 12 percent.

The hotel and restaurant industries also had the highest percentage of workers who use illicit drugs — 19 percent said they had used drugs in the past month. The arts and entertainment businesses had the second highest amount of drug use (14 percent), followed by management professionals in third (12 percent).

As for the professions least likely to use drugs or alcohol? Education and government were in the bottom three for both lists, which — hello! — is a mega relief to anyone who has ever entrusted their well-being into the hands of one of these professionals (so you know, basically all of us).

Of course, just because you're a miner doesn't mean you're absolutely going to be a big drinker. As the Washington Post points out, your job isn't necessarily going to push you to the bottle (although a glass of wine after work does wonders to occasionally alleviate stress, no matter what your profession), but certain jobs do tend to attract people who are already more at risk to become heavy drinkers or drug users. According to the Centers for Disease Control, men are more likely to drink and take other health risks than women — and it's men who almost entirely dominate the mining industry, which could help explain its place at the top of the list. Alarmingly, however, the study controlled for factors like age and gender when assessing the construction industry, which still landed in the top two professions with the highest percentage of drinkers.

So how do other industries stack up? Here are the top 10 jobs where people are most likely to drink:

According to the survey, almost 18 percent of miners drink heavily, putting them at the top of the list. However, only five percent said they use drugs.

Only one percentage point behind mining, 17 percent of construction workers are considered heavy drinkers, while 12 percent have engaged in illicit drug use.

People working in food and accommodations came in at number three, with 12 percent engaging in heavy drinking. However, people in this profession were most likely to use drugs (19 percent).

Heavy drinking is common among 11.5 percent of people working in the arts and entertainment industries. These professionals were the second most likely to use drugs (14 percent).

10.3 percent of people who work in utilities are heavy drinkers, and six percent have used drugs in the last month.

Of the people who work in wholesale trade, 10.2 percent are drinkers.

Management, defined by this study as "management of companies and enterprises, administration, support, waste management, and remediation services,” had a 9.9 percent drinking rate and a 12 percent drug use rate.

Of manufacturers, 9.7 employees reported heavy alcohol use in the past month.

When it comes to agriculture, forestry, fishing, and hunting, 9.4 percent of employees used alcohol heavily in the past month.

Nine percent of people in retail are heavy drinkers,