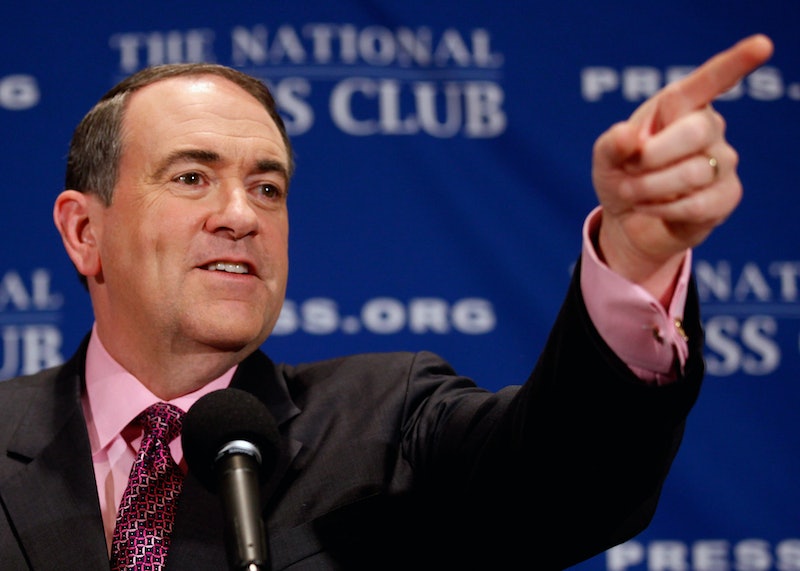 On Tuesday, Former Arkansas Gov. Mike Huckabee officially announced his 2016 presidential bid in Hope, Arkansas. This is his second time running for the Republican presidential nomination — his first run was in 2008 — and CNN said that this time he is characterizing himself as a small-town boy from Hope, instead of as a former Fox News host and multimillionaire. Because it's Huckabee's second presidential run, a bounty of memes and videos are already available across the wonderful web. Huckabee, an ordained baptist minister, now joins the crowded Republican field with Marco Rubio, Ted Cruz, Rand Paul, Ben Carson, and Carly Fiorina.

"I truly am from Hope to higher ground," Huckabee told the crowd in Hope, according to CNN. "So it seems perfectly fitting that it would be here that I announce that I am a candidate for president of the United States of America."

In his latest book, called God, Guns, Grits and Gravy , Huckabee criticizes the impact of Washington, New York City, and Los Angeles on culture, and refers to it as "Bubble-ville." He also offers his insight into the dangers of social media and the effect the government has on people's lives. Below are some memes that pay tribute to what USA Today called Huckabee's "chatty, folksy style," which includes the time he called Jay-Z Beyoncé's pimp and said her lyrics were too sexual (because Christian women don't talk about that stuff) and other nods to his inability to understand separation of church and state.

Huckabee's last presidential run included an ad with Chuck Norris, in which the duo traded "memes" back and forth, which explains the Huck and Chuck memes. And this year, it seems Norris still has Huckabee's back. Take a look at all the funny Huckabee memes we could find.

More like this
Will Beyoncé Be At The BET Awards To Perform “Break My Soul” Or Attend The Show?
By Jake Viswanath
American Girl Doll Memes Are Going Viral On Instagram & Tiktok
By Emma Carey
Demi Lovato, Jessica Chastain & More Stars Celebrated The 4th Of July By Protesting
By Jake Viswanath
For These Abortion Clinic Volunteers, Going TikTok Viral Is A Risk Worth Taking
By Audra Heinrichs
Get Even More From Bustle — Sign Up For The Newsletter