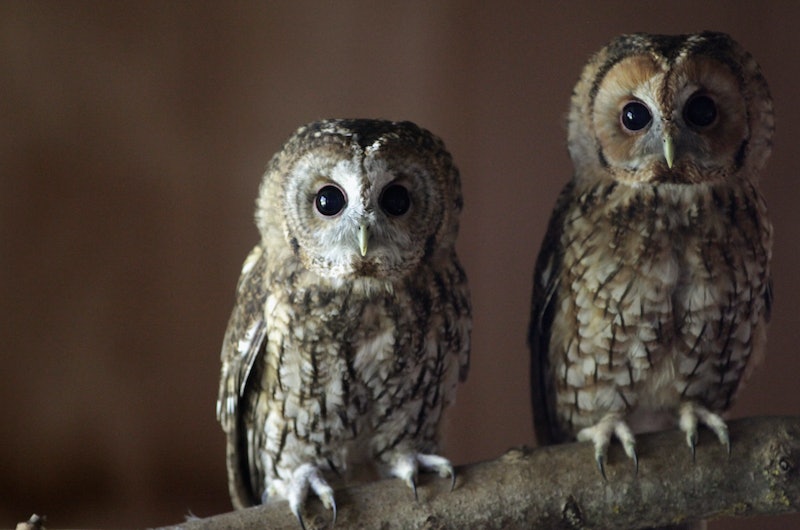 Today's jerk comes to you in the form of an owl. An owl I can't help but somewhat admire. Sitting on a roof with his owl pal, after nonchalantly turning, this owl poops on his friend, and then runs away. It's wonderful to behold. Even owls think excrement-related practical jokes are funny and also shameful, which just goes to show you that poop really is universally funny. Or that this particular owl just has a very juvenile sense of human humor.

Watching the video, I have a feeling the pooping owl didn't actually intend to shit on his friend. I think they were sitting there, as owls do, in silence, not really doing much of anything at all, when the owl decided to prank his friend with a fowl smelling fart he had brewing. But as he pushed what he thought was gas out, he realize he monstrously misjudged the situation, and wound up unleashing a horrifying shart instead. Hence the hasty guilt scurry away. We've all been there, right? You think you've got a stinker brewing but what's actually in there is something far more surprising vile and regrettable. The only thing that's really for certain here is that this owl is a jerk, so take comfort in the fact that jerkery extends to the animal kingdom and is not just an exclusively human trait.

Watch the entire ordeal below:

Here are some more animals being total jerks:

1. This jerk cat who doesn't give a raw fuck if you don't want it to break your glass cup

2. This jerk penguin farting right in the path of his pal

3. This jerk cat pushing another cat down the stairs

4. This jerk sheep head butting a fisherman for no reason

5. This jerk goat who just wants to argue