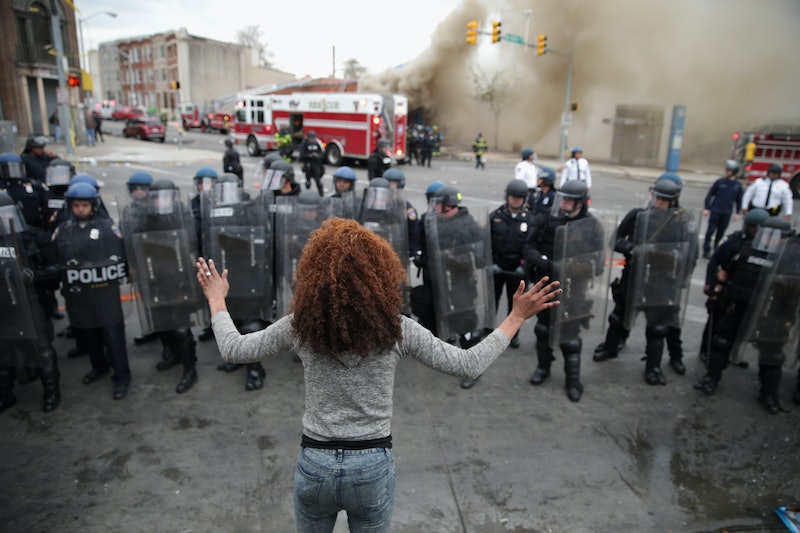 On Friday, Loretta Lynch announced that the Justice Department will launch a probe into Baltimore police practices, in order to determine if the department has a history of unconstitutional policing in the wake of the Freddie Gray incident. And if you're wondering how long the DOJ probe of Baltimore police will take to be released to the public, you're in luck — thanks to the department's similar probe into the Ferguson Police Department earier this year, we've got a useful comparison on hand.

It's not a perfect parallel by any means — Baltimore is a major metropolitan city, while Ferguson is a relatively small St. Louis suburb — but it could help shine some light, nonetheless. Word of the Ferguson probe first got out in early September 2014, announced by then-Attorney General Eric Holder as a means to take a closer look at the widely criticized Ferguson police. Now, in May 2015, we've got a new AG in town — Loretta Lynch, who announced Friday that her Justice Department would investigate the BPD.

So, how long is it likely to take? In the case of the Ferguson report, it was released six months after it was announced, from Holder's announcement on September 4, 2014 to its release on March 4, 2015. It's important to remember the size and scale differences when wondering about the Baltimore report, however — the BPD employs well over 3,000 people, while according to the city of Ferguson's website, their department only has 72 employees, just 54 of them commissioned officers.

In short, if you're looking to dig through a department's history to see if anything is amiss, tackling one as large (and with as troubling a history as has often been alleged) as the BPD is no small task. But considering how illuminating (and galvanizing, frankly) the Ferguson report turned out to be, uncovering examples of both personal and institutional racism in police and city management alike, you at least know that the DOJ will be doing due diligence on this.

In any event, the short answer on the BPD probe is "probably longer than six months," at least if the Ferguson timeline speaks for anything. It wouldn't be too shocking if it took longer than that, given sprawling size of the BPD, but especially considering that, it'd be something of a shocker for it to roll out any faster than Ferguson's did.

More like this
The Families Of Grenfell Tower Are Still Waiting For Justice, Five Years On
By Bustle UK
Yinka Bokinni Recalls Terrifying Truth At Heart Of 'How To Hire A Hitman'
By Frances Stewart
5 Concrete Ways To Take Action Against The Rwanda Deportation Plan
By Rachel Mantock
How To Support Gun Control Reform Right Now
By Morgan Brinlee and Carolyn Steber
Get Even More From Bustle — Sign Up For The Newsletter