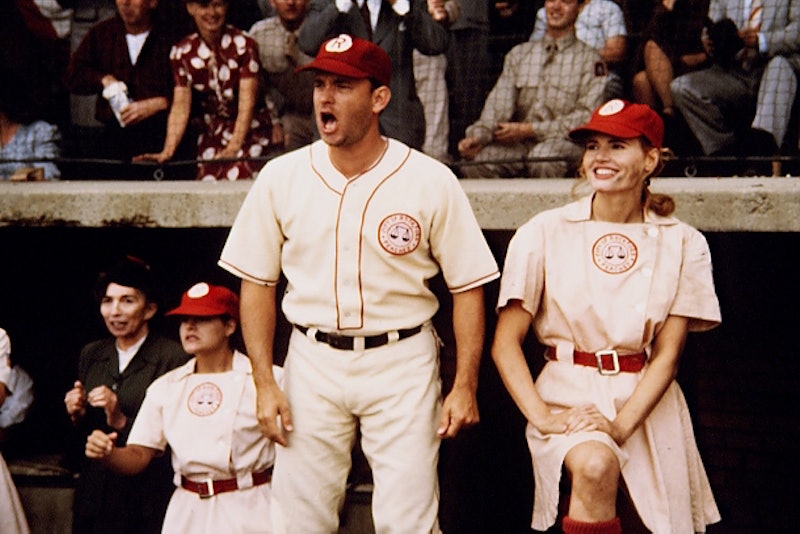 "There's no crying in baseball!" is one of the most famous movie lines ever. I don't want to be the bearer of bad news to Jimmy Dugan (played by Tom Hanks), but there was just A League of Their Own reunion, which will probably make fans of the film super emotional — aka tears are about to flow. On Thursday, Geena Davis and Rosie O'Donnell, who played Dottie Hinson and Doris Murphy, respectively, reunited at Arvest Ballpark in Springdale, Arkansas.

So, why the reunion? Not only is it a great way to remember the phenomenal movie, which told the story of the All-American Girls Professional Baseball League (AAGPBL) in the 1940s, but Davis and O'Donnell met with the two women who inspired the movie. These amazing women, Gina Casey and Alice Fracasso, played baseball in the '40s and are basically an inspiration to women everywhere. From 1944 to 1945, both Casey and Fracasso played for the Riverside Townies in Rhode Island. They and some of their Townies were scouted for the AAGPBL, where five of their teammates were drafted, including Fracasso.

Not only did Davis, O'Donnell, Casey, and Fracasso show up for pictures, but they visited the ballpark for a very special occasion. As part of the first annual Bentonville Film Festival, the four took part in a softball game. Davis and O'Donnell each managed a team. After the game, fans watched a screening of A League of Their Own at the stadium. Who else wishes they could've been there?

Excuse me, but I have to go watch A League of Their Own, now available on 20th Anniversary edition Blu-ray, STAT!