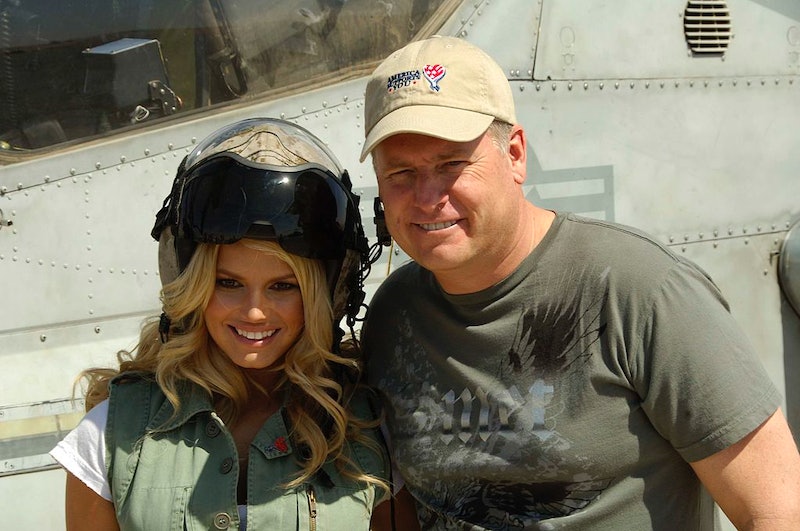 Black baby onesies that say "Lock up your daughters" on the front and pink ones that read "I'm not allowed to date, ever!" will probably be given as gifts to many new dads this Father's Day. They'll likely be viewed by both giver and receiver as a cute expression of the love fathers feel toward their daughters, and they do convey that sentiment. But they also express something far more troubling: the confusion that our society feels about whether a father's love for his daughter should also include controlling her and her body. Is being an overprotective father really the best way to raise the next generation of strong, confident women?

A common figure in TV, movies, and real life, the overprotective father is frequently viewed as charming, harmless, or even admirable — to the point where his actions are a frequent plot point in comedies. In Full House, Danny Tanner goes to DJ's boyfriend's house to spy on them when they're watching a movie. Bianca and Kat's father in 10 Things I Hate About You won't let Bianca date or Kat move across the country for college. We're supposed to think these overprotective fathers are adorable, as they go to great lengths to ensure their daughters' safety, even when it compromises their academic future (which, somehow, nobody remarks on in 10 Things I Hate About You). But there's more to it than just wanting to ensure their daughters' safety.

Many of us confuse the intensity of parental love with the efforts of many individual family patriarchs, and patriarchal society at large, to deny women autonomy. Telling our daughters what they can and can't do with their bodies, and that their worth is defined by these decisions, is not cute or loving — it's controlling and kind of misogynistic.

Parents have many legitimate concerns about their daughters' safety, of course. One recent study found that one in three women experience sexual assault between age 14 and their sophomore year of college, and the great majority of sexual assaults are perpetrated by dates and other acquaintances. But typically, the concerns of overprotective parents extend beyond protecting their daughters from sexual assault, to preventing the mere possibility that their daughters will engage in safe, consensual sex — or even in non-sexual romantic relationships.

When Gordon Ramsay joked that he had his son put a camera in his daughter's room to spy on her while she was with her boyfriend, The Times (UK)'s Kevin Maher wrote in response that nothing is "more likely to arouse our anger, our indignation, and our unfettered skull-crunching rage than a perceived and sexualized threat... to the purity and innocence of our daughters." Ramsay's heavy-handed behavior (regardless of whether or not he actually went through with it) and Maher's response demonstrate that overprotectiveness isn't just about protecting girls from actual dangers, like assault or abuse. The threat was not to Ramsay's daughter's safety but to her "purity and innocence." And though Maher refers to her boyfriend as a "sexualized threat," it is her dad who is sexualizing her by violating her privacy and making her "purity and innocence" his property — just as the "I'm not allowed to date ever" onesie marks infant girls as part of a market where their bodies are an item to be exchanged between fathers and potential suitors.

This market is implicit in most overprotective father-daughter interactions, but it's most loud and clear in purity culture, a usually Christian subculture that encourages chastity through a wide variety of methods — including purity rings, like the one infamously worn by Jessica Simpson to promise her father that she'd stay a virgin until marriage; purity balls where fathers promise out loud to "cover my daughter as her authority and protection in the area of purity;" and the high school wall posters that urged students to "protect her character" during prom.

While many of us are outspoken about finding purity culture unnerving, many of us have also been raised with the same subtle belief system that a woman who has sex outside of marriage (or at least a loving relationship) is ruined. That's it. Buh-bye, innocence. Holy Family Memorial, the Catholic healthcare provider network sponsoring the "protect her character" poster, took the association between chastity and "character" a step further by calling the message "one part in a series of timely social messages reinforcing the importance of values such as confidence, honesty and determination.” How are confidence and honesty related to not having sex?

This belief that a woman's sexual decisions put her character, confidence, honesty, and determination at stake creates unnecessary shame for women who "slip up" and get involved in sexual activity before they're "supposed" to. When virginity is considered a metric of women's value and their loyalty to their fathers, sex makes them feel as if they've betrayed their families and themselves. Dianna Anderson, author of Damaged Goods, writes about what she learned from her Christian background:

Having sex outside of marriage means disappointing God, disappointing family, and causing unnecessary pain and heartache for yourself.

Even when there aren't religious undertones to this shame, women are often labelled with character-defaming terms like "damaged goods" for making decisions that are nobody else's business.

In addition to propagating these messed-up ideas about what constitutes a woman's identity and worth, the trope of the overprotective father perpetuates damaging stereotypes about men and women by espousing a view of heterosexual relationships as predatory. Libby Anne writes on Patheos:

Men, the story goes, are "just trying to get into our pants" — an expression I never understood because, hey, if they're going for our pants first, aren't they just being considerate? Not according to this line of logic, which assumes that women field men's sexual desires but have none of their own. Nobody asks men, "Are you sure she respects you?" because "respects" is really code for "ensures that you refrain from all sexual behavior, lest your virtue be damaged."

Like the association between women's self-worth and sexual decisions, these gender roles can have lasting psychological effects on women. Libby Anne writes that being taught that “guys only want one thing from girls" — a stereotype drilled into even those of us who have never participated in purity culture — interfered with her ability to form healthy relationships by making her afraid of men well into adulthood.

What if, instead of trying to instill fear in their daughters and police their bodies, overprotective fathers protected their daughters by trusting and empowering them to make their own sexual decisions? What if we taught girls that, yes, sexual assault is a thing, and poor sexual decisions are a thing, but sexuality is normal and, under the right circumstances, positive? What if we used the media to celebrate fathers who treated their daughters as human beings who deserve to learn how to manage their own romantic relationships, instead of thinking of them as symbols of innocence?

I think it might help a lot of young women get a healthier start relating to their own sexuality — and I would know, because my own dad never relied on the tropes of overprotection when I was a teenager. He never told me I couldn't date until I was 30 or asked my date, "What are your intentions?" through pursed lips. Instead, he advised me, "You don't have to wait until you're married. You don't even have to wait a month. Just find a good person and use protection." Though this conversation was awkward — and is still a bit awkward to recount, especially knowing my dad reads my articles (hi, Dad) — it was refreshing to not feel spoken down to, as I often did when adults gave me and other young women advice regarding our sex lives. I knew that I could confide in him if I needed to, and he would treat me like the adult I was.

I also know women who can testify to the effects of the opposite approach. "The so-called protectiveness can be really detrimental," Dr. Elana Maryles Sztokman — who describes herself as "a recovering daughter of a control-freak father" — told me.

It instills a complete lack of trust, teaches the daughter that she can't rely on herself, cannot trust herself, cannot handle herself, that the world is scary for her because she's a woman but it's not scary for men, that she will always need him and will never be independent nor should she ever want to be.

"Locking up your daughters" doesn't prepare them to handle the freedom they're entitled to — it teaches them that they're not capable of handling freedom or learning who they really are. And telling them they're "not allowed to date, ever" not only denies them a basic human experience that would likely make them happy, but might give them guilt related to romantic relationships for the rest of their lives.

Dads — even dads who feel like they don't ever want their daughters to date — must know their daughters deserve better than that. If they do, they'll teach them that what matters for their sex lives is not how long they wait or how many partners they have, but whether they feel safe and respected — and that respect is not about "protecting her character" or her "purity and innocence." They'll acknowledge their daughters are free agents who deserve choices over their bodies — and that they are still worthwhile women, no matter what choices they make. It's not a motto that fits on a onesie, but it's one worth remembering.