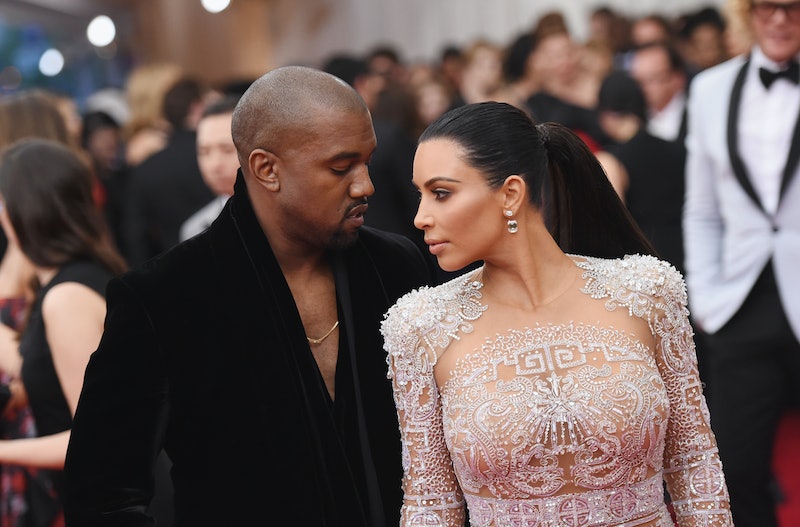 This time last year, I was glued to the Internet eagerly awaiting photographs from Kim Kardashian and Kanye West's wedding, a breathtaking event that the world was waiting to see. Whether you are a fan of the duo or not, you have to admit that they shut down the red carpets with their jaw-dropping styles. (I'll just be honest, one of the main reasons I pay attention to Fashion Week is to see what Kimye will wear to the designer's shows.) Luckily, Kim Kardashian is the queen of snapshots and selfies. We didn't have to wait long to see stunning photos from Kimye's pre-wedding party in Versailles, and their romantic nuptials in Florence, Italy. In celebration of their one year anniversary, Kardashian's mother, Kris Jenner, posted a video of Kimye dancing to John Legend's "All of Me" at their reception.

Kardashian has also been reminiscing by posting never-before-seen photos from her whirlwind wedding weekend. From golden carriages to a smiling West, their wedding was clearly unforgettable. Despite what we may think of them personally, it is clear that they are madly in love with one another. From the moment they began dating, Kimye have always had glowing things to say about each other. One year after their wedding, their love for one another appears as strong as ever. Rumor has it that the couple will be renewing their vows in Paris in the near future. Hopefully, we will get out hands on some of those photographs are well. After all, can you really hate on the couple that gave the world North West?

Here are seven of the most exquisite never-before-seen photos from Kimye's wedding, as well as a video of the couple dancing at their reception.

Kimye swayed to John Legend's live rendition of his ballad "All of Me" at their wedding reception.

A Parisian Girls Night Out

Before Kimye changed the location of their wedding at the last minute, it was assumed that the nuptials would take place in Paris. Though the ceremony took place in Italy, Kim K and her girlfriends still took time out of their busy week to take this gorgeous picture in front of the Eiffel Tower.

Think what you want about the most famous Kardashian, but it's obvious that she has a great sense of humor. Despite the rain, Kim K had a fantastic time strolling though Valentino's garden with her big sister, Kourtney Kardashian, and the revered designer himself.

We could all learn a thing or two about making an entrance from Kimye.

These days, it's very rare to catch Kanye West smiling. However, in this photograph, he was all teeth. His joy was clearly contagious, as everyone surrounding him, including his soon-to-be wife, was filled with happiness.

Even if you don't believe in happily ever afters, you have to admit that this golden carriage was magical. There is no better way to ride around Versailles.

Kimye has obviously bonded over their love for fashion. The couple's famous fashion friends were not in short supply during their wedding week. André Talley, Giancarlo Giammetti, and Valentino all showed up to support the couple.

Though we saw a ton of photos from Kimye's reception photo booth last year, this photograph of the couple is new. The picture is still glamorous, but the couple seem happy to just be with one another.