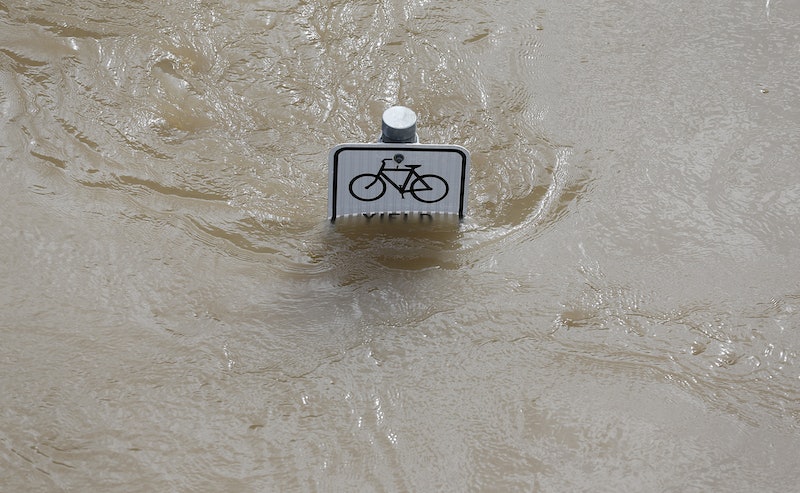 Massive floods hitting Texas and Oklahoma Tuesday and Monday has meant tragedy for both states. The flooding has so far resulted in 11 deaths in both states, with at least 30 people still missing in Hays County, Texas. Over 800,000 people in the Houston area are without power, and 30 million people in seven states are at risk as rains continue. Residents of Houston are using the trending hashtag #houstonflood to tweet about the damage. Incredibly, the floods have also brought drought relief, resulting in speculation that California will also see rain that could end its drought — but also result in similar damage.

Houston has borne the brunt of rainfall and flooding, certainly enough to spawn the #houstonflood hashtag. KHOU anchor Lily Jang tweeted a photo of a submerged Galleria mall that has garnered around 1,700 retweets and 900 likes. KHOU is also keeping a list of areas to avoid due to floods and damage, while Gov. Greg Abbott has tweeted inspiring messages to Houston and to Hays County, another hard-hit area. At the same time, the rain has effectively ended a drought in Texas in place since 2010, as well as another long-running drought in Oklahoma.

Here are some of the other tweets and pictures coming out of the area...

At the drought's peak in 2011, Lake Buchanan and Lake Travis, in Texas' Hill Country, were at 32 percent capacity; now they are now half-full. The two lakes are both important water sources for Central Texas.

Due to the flooding and a surprisingly wet spring, many areas in Texas have been declared "drought-free" for the first time in five years. According to the LA Times , the recent swell of rain is likely the product of El Niño, building up a storm in the eastern tropical part of the Pacific Ocean. If this storm continues to grow, this could mean the drought-ending rains for California next winter.