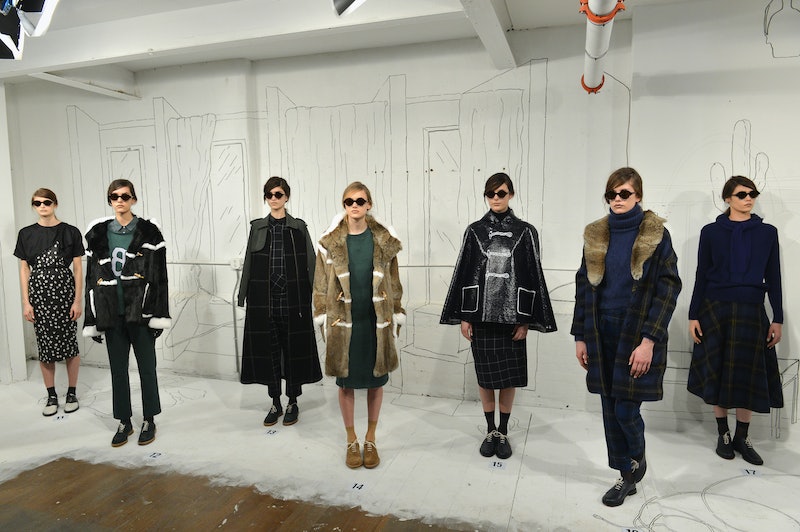 This pains me to even type this out, but it looks as if beloved brand Band of Outsiders is over, reportedly calling it quits. According to Fashionista, due to a lack of funds, the brand has canceled their wholesale orders for fall and laid off most of its staff, including VP of Marketing and Communications Nicole Cari. I think I'm going to have to take a personal day tomorrow, due to this devastating death of one of my favorite brands.

Just a few months ago, American Apparel snagged one of Band of Outsider's designers Joseph Pickman, and it looks like it was a good time to leave. This news is breaking quirky prepsters' hearts everywhere, and if the rumors are all true, I will truly miss the brand's too cool for school aesthetic and killer coats for the fall and winter.

The brand, which started in 2004, began as a men's tie and shirting company, founded by Scott Sternberg. Band of Outsiders gained popularity quickly — they were picked up by Barney's, and in 2007, Sternberg launched a women's line. Just a year later, the brand became a CFDA/Vogue Fashion Fund nominee. Things were only going up.

Only two years ago, the brand opened their first standalone store in Tokyo, according to Fashionista. From there, they opened in the U.S. on Wooster Street in SoHo in New York City just last fall. Unfortunately, the rise to success is just as fast as hitting a troubled road.

Though this doesn't mean that Band of Outsiders is truly over, it does look pretty bleak. Only time will tell the brand's destiny. Fingers crossed for you, BofO. I'll miss you, but I'm hoping not for too long.

More like this
An Ode To The Balm That Keeps My Hayfever At Bay
By Jessica Morgan
Mrs. Wheeler Wore A Vagina Necklace In 'Stranger Things' Season 4
By Allie Fasanella
12 Clear Resin Rings That Are So Y2K-Chic
By Vanessa Powell
You Can Buy Margot Robbie's 'Barbie' Roller Skates Now
By El Hunt
Get Even More From Bustle — Sign Up For The Newsletter