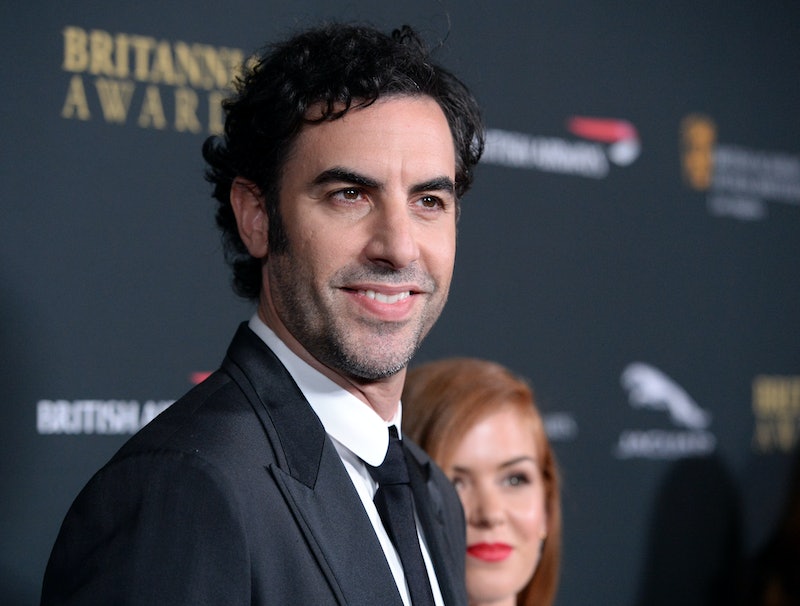 Ah, Sacha Baron Cohen — where would we be without your penchant for momentarily upsetting everyone in your proximity? It's rather impressive, and at its most interesting not onscreen in your movies, but in real life when you're doing things like throwing ashes on Ryan Seacrest. His most recent foray into audience-shock? Sacha Baron Cohen killed an old lady.

Well, OK, not really — that would probably be a little bit of a bigger news story, dontchathink?

Here's what happened: Cohen was all set to receive the Charlie Chaplin Brittania Award For Excellence In Comedy at this Saturday Brittania awards. The woman there to present him with his prize — one of Chaplin's old canes, which is pretty neat — is said to be Grace Collington, and 87-year-old woman who purportedly also happens to be the oldest living co-star of Chaplin.

So Cohen goes up to accept the award, does a little Chaplin jig, everyone giggles and generally feels warm and fuzzy inside — then Cohen "slips" and knocks the old lady out of her wheelchair.

Shock! Awe! General bad emotions! Then Cohen continues about his business and gives his acceptance speech. Here is that speech, as reported by Deadline :

Grace Collington is the oldest, sorry, was the oldest … I dedicate my award to her. It's obviously a tragedy, but on the bright side what a great way to go. She'll probably make the Oscars In Memoriam section. Anyway, tonight is not about her, it's about me.

This was followed by Collington being carried out of the ballroom to the "rollicking" laughter of those who undoubtedly like to see the elderly suffer. Gotta say, we're kind of having our doubts that that old lady really worked with Chaplin.