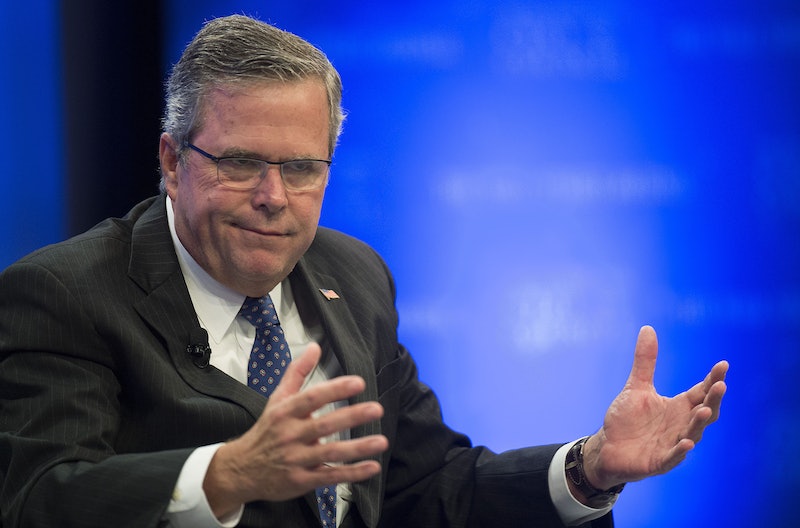 If you want to have zero fun with your reading this summer, then Jeb Bush’s book recommendations are for you. While visiting a biomedical company in Michigan Thursday, an Emergent BioSolutions employee Clayt Robinson asked the (not-yet-official) Republican presidential candidate "If I were to read one book this year, what would you recommend?" Bush responded with a decently varied (if not exactly beach-friendly) list that included The Bible and a book by his favorite controversial author Charles Murray.

Bush's first pick? The St. Paul letters in the New Testament, which he says he's currently reading. "I’m not sure that fits your spiritual views,” he added, “but it’s pretty good reading.” From there, Bush recommended the Bible as a whole, admitting that he himself has never read it completely “from cover to cover,” and recommending it “particularly if you want to get your architecture straight, your life kind of centered, that would probably be the best book ever written."

The former Florida governor then recommended conservative (and some say racist) author Charles Murray's Coming Apart: The State of White America 1960-2010, which looks at the development of differences in values and behaviors between lower and upper class white Americans. Bush called it “a very tough book,” and recommended it for those who “want to be depressed about things.” (Always a plus when you're looking for some summer reading.)

Bush then mentioned a book he said came from “the left perspective” on “social conditions and the lack of social and economic mobility in the country,” by Robert Putnam. (He couldn’t remember the title of the book, but but based on Bush’s description, it’s likely he meant Our Kids: The American Dream in Crisis .)

For those of you who enjoy a little serial murder with your sunshine, Bush’s final recommendation might actually be the most vacation-friendly. Forgetting the title to the this one too (this memory issue is a little worrying if he actually ends up president), Bush described the book as about “mass murder within a mile away of this extraordinary World’s Fair.” (The audience easily named the book as The Devil in the White City, by Erik Larson.) It isn’t exactly what I’d call summer reading, but, hey, whatever you’re into, Jeb.