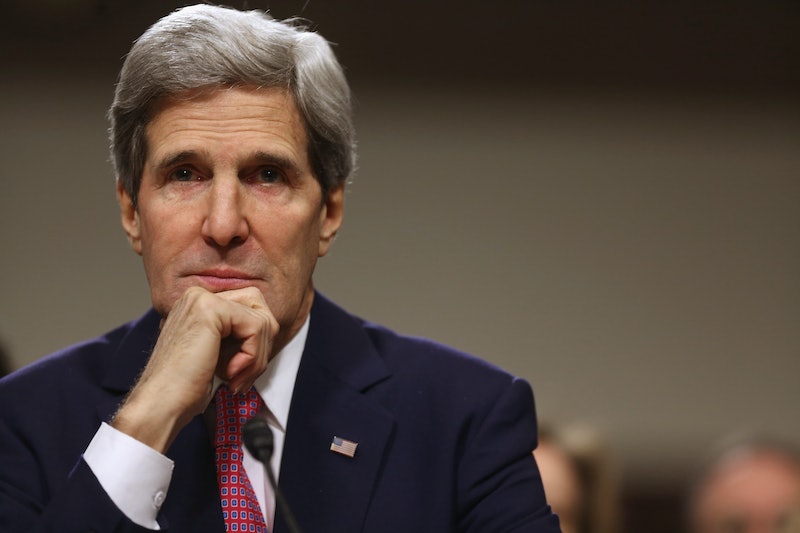 John Kerry has broken his leg in an accident while biking outside of Geneva. The Secretary of State, 71, is in Switzerland participating in nuclear talks with Iran's foreign minister. Kerry is said not to have lost consciousness in the incident and was quickly transported by helicopter to a nearby hospital. State Department spokesman John Kirby reports that the diplomat is currently in stable condition, but will be cutting short the rest of his planned European trip, opting instead to return to his hometown of Boston for further care.

“Secretary Kerry broke his right femur in a bicycling accident this morning in Scionzier, France,” Kirby said in a statement. “Given the injury is near the site of his prior hip surgery, he will return to Boston today to seek treatment at Massachusetts General Hospital."

Kerry's accident is said to have resulted from him hitting a curb while biking. Fortunately, a paramedic and a physician were part of the Secretary of State's motorcade at the time the accident occurred, allowing him to receive prompt medical attention.

Kerry's now-cancelled travel plans included a stop in Madrid ahead of a conference in Paris scheduled for Tuesday, where he was slated to meet with foreign ministers from a US-assembled coalition aimed at addressing the mounting concern surrounding the Islamic State, or ISIS. The diplomat now plans to attend the meeting via video.

Department spokesman Kirby continued, "The Secretary very much regrets not being able to visit Spain to meet with one of our close allies for discussions on a range of issues, as well as being unable to attend the counter-ISIL coalition ministerial meeting on Tuesday in Paris in person.”

This is not John Kerry first sports-related injury; the avid cyclist previously injured his shoulder in a 2004 bike accident, which he had to undergo surgery to repair.