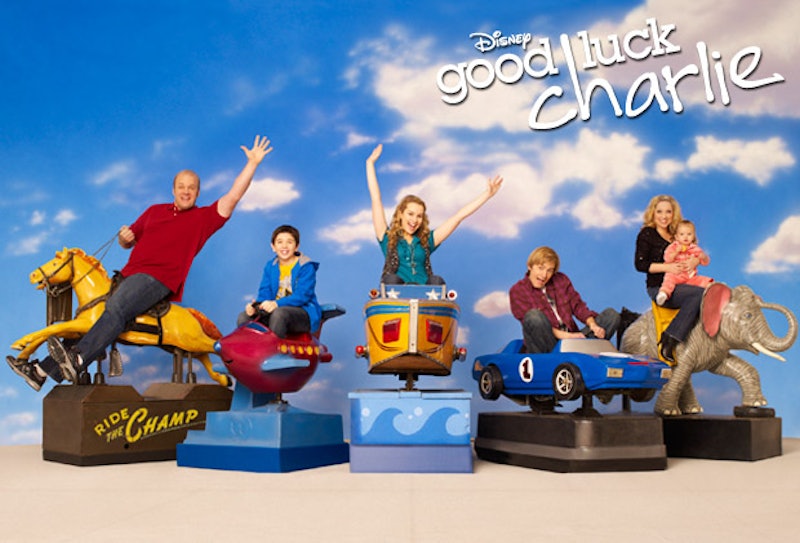 The Disney Channel recently announced that an episode during the final season of their children's program Good Luck Charlie will feature a storyline with a two-mother family. Set to air in early 2014, Charlie Duncan's parents set her up on a playdate with a friend who has two moms. That Charlie's friend comes from a same-sex family, though, is a secondary plotline, which is perhaps what is most remarkable about Disney's inclusion of the couple - that it comes without aplomb.

Upon announcing the same-sex couple storyline, Disney released the statement that "This particular storyline was developed under the consultancy of child development experts and community advisors... Like all Disney Channel programming, it was developed to be relevant to kids and families around the world and to reflect themes of diversity and inclusiveness."

The fact that the same-sex couple will be woven into the fabric of the show rather than act as a set piece is laudable progress. Disney is finally reflecting America's rapidly changing attitudes towards gay marriage. In a March study done by the Pew Research Center, 49 percent of Americans polled in 2013 were in favor of gay marriage. This is a drastic shift from a decade ago when only 33 percent were in favor.

Though Disney Channel owns ABC, which airs Modern Family, a show with gay main characters Mitchell and Cameron, they themselves have been relatively silent in the conversation about gay families. Which is why this move is particularly surprising and groundbreaking; Disney Channel is one of the most, if not the most mainstream distributor of children's entertainment. The appearance of a lesbian couple on Good Luck Charlie will hopefully open conversations in family homes in America about the diversity of families. Good for you, Disney Channel!

More like this
Kit Connor Speaks Out On “Shocking” Lack Of Bisexual Representation
By Sam Ramsden
The 'Kenan & Kel' Reunion On 'SNL' Took A Dramatic Turn, Thanks To Keke Palmer
By Brad Witter
These 'Criminal Minds' Throwback Photos Show The Cast’s 17-Year Evolution
By Grace Wehniainen
The First Trailer For 'That '90s Show' Includes So Many Nods To The Original Series
By Jack Irvin, Alyssa Lapid and Grace Wehniainen
Get Even More From Bustle — Sign Up For The Newsletter