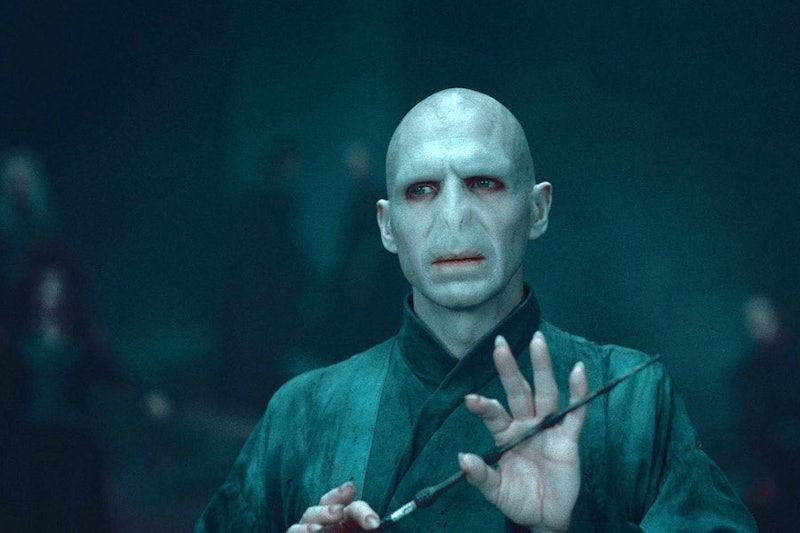 He-Who-Must-Not-Be-Named is one of the baddest villains in all of the literary world, but according to the latest Washington Post-ABC News survey, Voldemort is more popular than most Republicans running for the White House. The results are surprising considering Voldemort killed Harry Potter's parents, hatched the plan to kill beloved Dumbledore, and was pretty much the evilest guy to ever step foot in Hogwarts. But despite all that, there are still plenty of reasons why Voldemort wouldn't be the worst president ever.

The survey ranked the net favorability ratings of some fictional bad guys and those who have or might soon announce they're running for president. The ratings were calculated by taking the difference between positive votes and negative votes. The Terminator, Darth Vader, and the shark from Jaws actually polled better than all the politicians on the board. Vermont Sen. Bernie Sanders was the only candidate to have a positive rating (though the Post acknowledged it was largely due to people not knowing who he was).

People really do not like Voldemort, who got a net favorability of around -12, but they apparently hate some Republicans even more. Mike Huckabee, Jeb Bush, Rick Santorum, Chris Christie, and Donald Trump all ranked below Voldemort. That's saying a lot.

If you actually take a look at Voldemort, you'd be surprised that he carries a lot of traits we'd want in our next president. Don't get me wrong: The guy is totally evil. But that doesn't mean he isn't a solid leader.

He Brings People Together.

Our country is divided on almost every single important issue — abortion rights, climate change, foreign policy, big vs. small government. But Voldemort has the ability to take all the baddest wizards, who barely get along with each other, and unite them under his evil cause. On the other side, any wizard with an inkling of good in them comes together to stop him. So in a way, Voldemort's presence ends all the little squabbles and creates one force to be reckoned with.

His Followers Are Super Loyal.

Some have a fanatic love for him — cough, Bellatrix — and others follow out of fear. But Voldemort has a loyal following that will rise to his call. Even after being in hiding for years, Voldemort still rallies his Death Eaters, all of whom sport the Dark Mark. These presidential candidates' favorability polls have been all over the place throughout their careers. Christie's rating completely flipped since Hurricane Katrina. The latest numbers show only 27 percent of voters think highly of him.

He Has A Clear Vision.

You'll never hear anyone accuse Voldemort of backtracking on his beliefs. He has one clear vision — live forever, be the ultimate wizarding dictator, and defeat his one nemesis Harry Potter — and he's never strayed from it. Flip-flopping is one of the biggest accusations these presidential candidates have been hurling so far, but in reality, everyone has pretty much done it. Voldemort is consistent.

He's Willing To Die For His Cause.

Voldemort doesn't have to go after Harry Potter, but he's so determined to, he'll stop at nothing until he makes it happen. That's real dedication there, and there are few candidates, if any, that can declare their platform is worth death. I mean, Sanders' unwavering quest to knock down Wall Street probably comes the closest.

Yes, yes, it's dark magic, and Voldemort uses it for not so great things (like Avada Kedavra-ing anyone who stands in his way). But no other presidential candidate has magic, and you can bet they wish they did. How easy would it be to solve all our country's problems then.

To be fair, all of these reasons also describe Harry Potter. Harry for 2016!