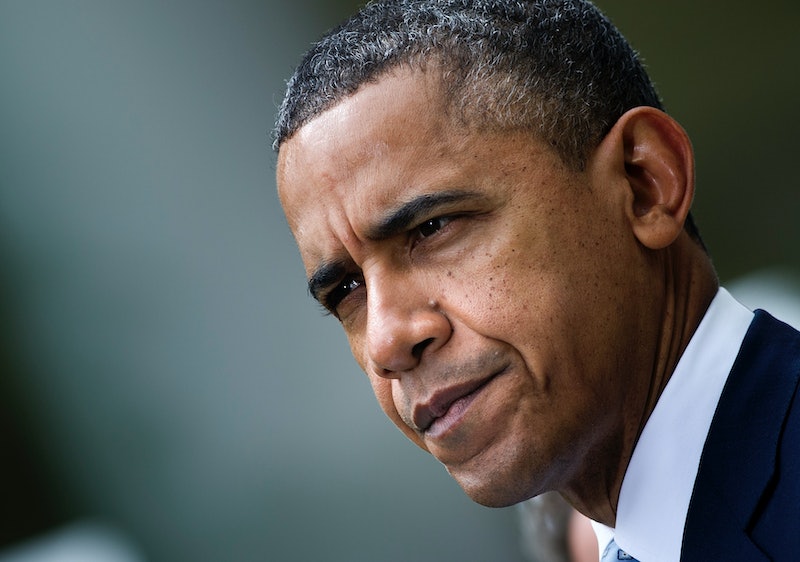 The White House's legislative agenda suffered a big defeat in the House on Friday, and contrary to what you might think, it didn't come from any of the usual suspects — President Obama's trade deal was derailed by House Democrats, dealing a major blow to what he's carved out as a chief priority for his second term.

It doesn't spell utter doom for the Trans-Pacific Partnership deal, to be clear. According to the Los Angeles Times, the White House characterized the House Democrats' downvote as a "procedural snafu" — which may be selling the depth of the opposition quite short — and said that another vote was planned for next week.

The trade bill depended on the passage of two different votes on Friday to get to the President's desk — one authorizing new executive authority to fast-track trade agreements, and one to fund retraining programs for American workers. The former did manage to pass, by a slim 219-211 majority, buoyed by an atypical amount of Republican support. But, with the latter being the obvious final barrier in the way of the deal's passage, left-wing House Democrats and progressives — historically wary of free trade agreements and their impact on American workers — balked, and voted it down.

The final tally was not close: 126-302, a veritable shellacking, to use an old Obama parlance. It wasn't for lack of trying on his part, but apparently it came a little too late, and at least in the opinion of one prominent Democrat, with not quite enough tact. According to the Los Angeles Times, Oregon Rep. Pete DeFazio saw Obama's last-ditch, 20-minute plea to "play it straight" on the deal as a guilt trip.

Basically, the president tried to both guilt people and impugn their integrity. There were a number of us who were insulted by the approach.

The situation has put Obama in the odd, politically perilous position of being more tightly aligned with a handful of Republican congresspeople than with many members of his own party. As detailed by The New York Times on Friday, Pennsylvania Rep. Charlie Dent accused the Democrats of hostage-taking — a turn of phrase Democrats have used against congressional Republicans before, albeit over far more serious, potentially calamitous circumstances like the debt ceiling.

They have taken their own child hostage. Does it hurt the president? Of course it hurts the president, but it hurts America more.

For his part, President Obama weighed in following the bill's defeat, characterizing the TPP as a means to protect American influence in global economic affairs, as CNN noted.

These kinds of agreements make sure that the global economy's rules aren't written by countries like China; they're written by the United States of America. And to stand in their way is to do nothing but preserve the long-term status quo for American workers, and make it even harder for them to succeed.