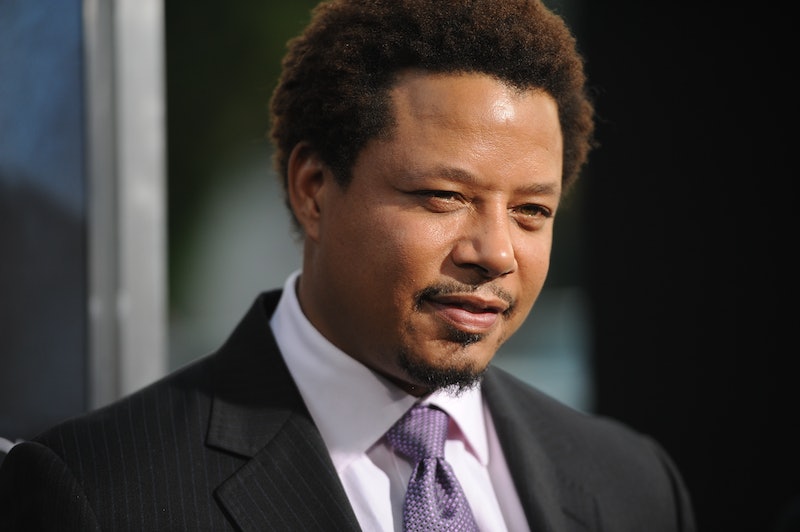 Empire's Lucious Lyon knows all about raising sons (although, he definitely doesn't do the best job of it), and now, the actor who plays him is going to learn even more about raising boys, as well. Terrence Howard has welcomed a baby boy with his wife, Mira Howard, the actor revealed to Access Hollywood on Monday. In fact, the baby was born four weeks ago, but the couple decided to wait to reveal the exciting news publicly until now.

The Howards decided to name their new son Qirin Love. According to Access Hollywood, the "name is derived from the mythic Chinese creature, the qilin, which is said to appear before a time of prosperity or serenity."

It sounds like the couple is overjoyed with their newest family member. Howard told Access Hollywood, "He's beautiful and strong and a whirlwind and my wife is so happy." As for how they're handling the stress that comes with a newborn, the Hustle & Flow actor tries to take the night shift. "She has the boobage and nurses him during the day. So, I pull night duty, so that she can sleep and I keep him with me and will take some of the pre-pumped, you know, breast cheese, whatever you call it," Howard said. While "breast cheese" is an... interesting way of putting it (it's just breast milk, dude!), it sounds like they've got a handle on things.

And it's no surprise that Howard knows his stuff. According to Us Weekly, Qirin is the fourth child for the actor. He has two daughters, Aubrey and Heaven, and a son, Hunter, from a previous marriage.

Congrats to the proud parents and a warm welcome to baby Qirin!

More like this
Gabourey Sidibe Wore A Traditional West African Wedding Dress On The Cover Of Brides
By Dominique Norman
Joe Alwyn Just Shared The Sweetest Taylor Swift Memory
By Sophie McEvoy
When Was 'Bling Empire' Season 2 Filmed?
By Alyssa Lapid
Cherie & Jessey's Relationship Timeline Is As Complicated As It Seems On 'Bling Empire'
By Brad Witter
Get Even More From Bustle — Sign Up For The Newsletter