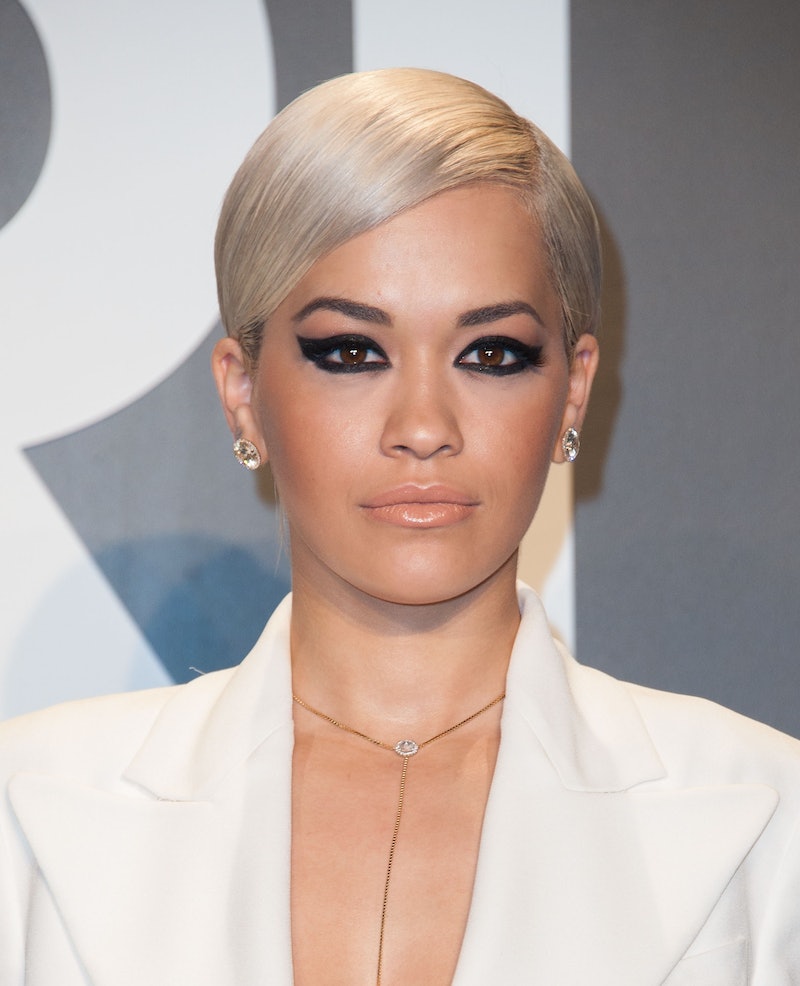 Meshing two musical powerhouses and expecting romantic harmony is, well, a bit of stretch. But, that did't stop one girl from trying. Rita Ora covers Marie Claire's July issue, suggesting the best way to get back at an ex is to wear floral prints and rock on fleek brows.

Ora rocks a flirty pink top with elaborate bows and floral rhinestones in one version of the cover, which is mild compared to the knockout floral pantsuit she wears in the second version (sans tee underneath, of course). Her ultra-dark brows are the star of the show, while cheeks and lips are a natural, pinky hue. As much as I love seeing Ora with her dramatic, glammed up beauty looks, I'm totally digging this romantic, more natural-looking face.

In another spread, Ora is wearing a mod, black and white ensemble with polka dot boots. Talk about channelling different looks and different time periods! And boy, does she do it with ease.

Of course, she didn't just sit pretty for Marie Claire. Ora got candid about her split with DJ Calvin Harris after dating for 13 months and then breaking up in June 2014. In the year since, she's grown and isn't shy about sharing her love lessons learned.

"There was a reason why I split up with him. And there was a reason why I'm at this point in my life where I feel like I have so much musical freedom, and I don't have to explain myself to anybody," the singer, 24, confessed, according to E! "It was more of a thing where I was in awe. I was at that point in my relationship where I felt he could do no wrong. I thought he had my back and that he'd never steer me wrong. But then 'I Will Never Let You Down' came out, and everything started to go a bit weird. I don't know if it was because business was mixed with personal or what."

Right now, Harris is linked to Taylor Swift while Ora has been rumored to have dated Ricky Hill since her split with Harris.

"I'm afraid of being alone,"she said to Marie Claire . "I'm not afraid to admit that, you know. I'm not embarrassed to admit that. I just hope it's not a never-ending cycle. Sometimes love just makes you feel crazy. And that feeling that we have as girls, just to have that feeling, even for five seconds, it's like crack. I mean, don't compare it to that, but you know what I mean. It's like comfort eating."

We totally sympathize. While she may not have it all figured out in the romance department, she does have on fleek eyebrows and a killer fashion sense. That's what really counts, right?