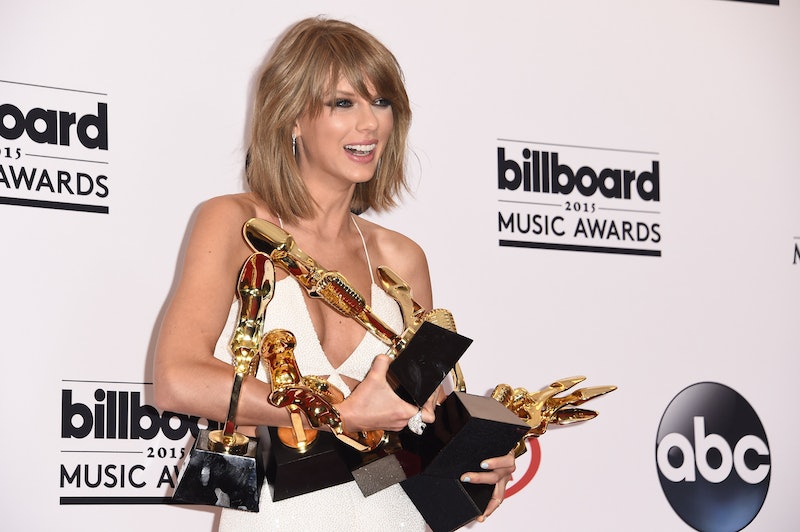 Though she's has always been a total badass, Taylor Swift calling out OK Magazine for pretty blatant sexism just took her up another notch on my star chart (suffice to say, she's pretty much at the very top now). In a tweet, Swift wrote, "@OK_Magazine this misleading headline and your choice of words in labeling me are why we need feminism in 2015." BOOM. Seriously, this girl deserves a round of applause STAT.

Though the story isn't linked in her post (and rightfully so), Swift's tweet came shortly after OK's Twitter posted VERY misleading headline about the singer to encourage readers to click through to their website: It's a practice known in the industry as clickbait, and it sucks. Case-in-point: Though the actual story is that Swift helped a sweet couple announce their pregnancy to the world, OK tagged Swift's Twitter handle and claimed that she "made a 'pregnancy announcement'."

To make matters worse, the actual story wasn't any better: In it, the sub-headline not only didn't call Swift by name, but referred to her as "Harry Styles' ex-girlfriend," which is pretty reductive and offensive for obvious reasons — aka, Swift is a human being who isn't defined by her exes. It's not 100 percent whether or not Swift's response tweet is referring to this, but considering the timing, it would make sense.

Either way, Swift speaking out on Twitter applies to the tabloids' treatment of female celebrities in general — and paired with the meme she chose to accompany her tweet, it is so, so good. Having someone like Swift call this behavior out is a step in the right direction in getting it to stop.

Of course, this isn't the first time Swift has spoken out against the sexism she's faced in the industry. In an interview with The Telegraph published earlier this year, she hit back at critics who accused her of being a man hater due to the subject of her songs — an accusation she didn't take lightly and quickly rebutted because, uh, that's not what feminism is. In late 2014, Swift stopped by Australian radio show "Jules, Merrick & Sophie" to shut down haters who criticized her for writing songs about her relationships, pointing out the inherent sexism such a point implied. Basically, she's been fighting the good fight for a while now and doesn't look to be slowing down anytime soon.

There are so many reasons to love Swift, and her continued refusal to put up with the status quo when it comes to discrimination against women in the industry is not only inspiring, it's vital. She understands that she has a unique and special platform from which she can make a serious change, and I, for one, am grateful she's doing it.