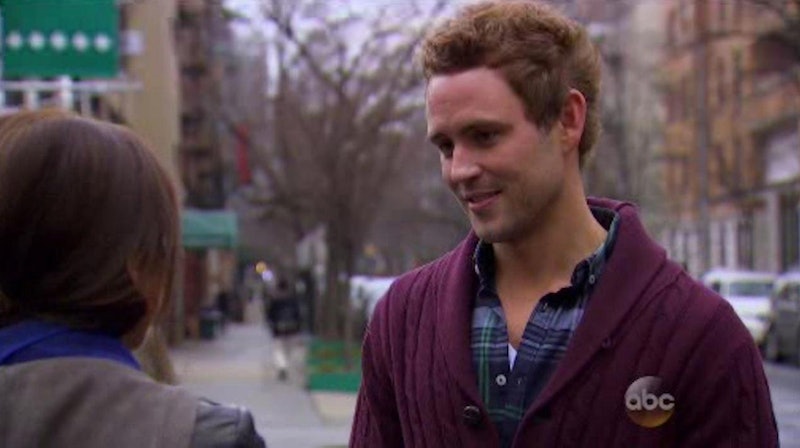 So, now we all know: Kaitlyn Bristowe and Nick Viall had sex on The Bachelorette , and boy, does everyone have an opinion about it! Twitter is ablaze with awful things, the guys on the show are understandably upset that Nick and Kaitlyn share a connection that most of them don't have, and Kaitlyn even seems to be second-guessing her bedroom choices. (Not because she had sex, but because it might hurt her other relationships. Important distinction.) But, what’s done is done, and the only people who have to live with that are Nick and Kaitlyn.

Whatever happened, and whatever the popular opinion, there's definitely one good thing about Nick: He is totally defending her and their romantic relationship on Twitter. We don’t yet know if Nick and Kaitlyn end up together, but it’s nice that he’s stepping up to the plate for Kaitlyn. Too often is the woman in a situation like this hung out to dry and judged for her sexual actions, and the man is looked upon like a stud because he added a notch to his belt. As the episode aired, Nick took to his personal Twitter account to comment on their relationship and how he feels about it.

Who are any of us to throw stones? While sticking up for Kaitlyn is awesome, what still grinds my gears about Nick is that he decided he needed to share bits of their tryst with the group. (He said she invited him back to her suite, and they shared an "intimate" time. Not only is that impolite, but it's also completely unfair to the other person, especially in this group situation. (Also, dude, stop kissing and telling, you already did that with Andi.)

Relationships and sex should be kept private unless both parties say otherwise. But, though that's problematic, Nick is completely right: Both women and men should be able to do what they want with their bodies without anyone else judging it. So Bach fans need to just chill out.