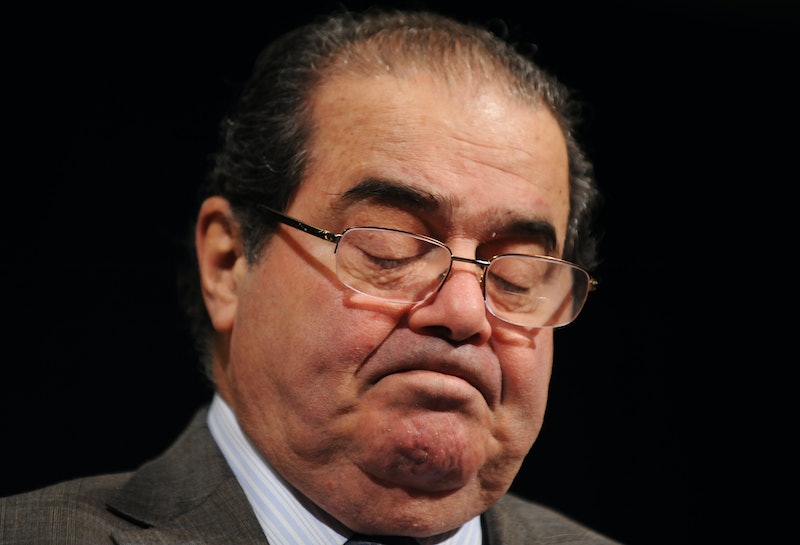 In a historic decision on Friday, the Supreme Court ruled in favor of gay marriage, upholding a petition that challenged the unconstitutionality of denying same-sex couples the same rights as heterosexual couples. It was a landmark ruling, prompting Americans everywhere to celebrate. Of course, there was one person who wasn't entirely pleased with the decision — and in a scathing dissent, Justice Antonin Scalia made clear just how unhappy he was.

"I join THE CHIEF JUSTICE’s opinion in full," wrote an incensed Scalia on Friday. "I write separately to call attention to this Court’s threat to American democracy." Scalia then went on to describe the ruling as "not of immense personal importance."

Be honest, if someone had a camera on Scalia as he wrote his dissent, he probably would have been sticking his fingers in his ears and yelling, "LA LA LA LA, I can't hear you!" If ever there were a more outrageously angry dissent, you'd be hard-pressed to find it. Peppering his write-up with phrases like "robs the People of the most important liberty" and "an opinion lacking even a thin veneer of law," the SCOTUS Justice made sure we all knew that he was totally not a part of this huge ruling that will likely forever change the landscape of the American Dream™.

In case you haven't read Scalia's epic meltdown or are having a hard time understanding the lofty language, here's a basic breakdown of what he wrote on Friday:

"I write separately to call attention to this Court’s threat to American democracy."

How DARE you give gay people and LGBTQ couples rights? Our founding fathers would be ashamed.

"The Court’s claimed power to create 'liberties' that the Constitution and its Amendments neglect to mention."

"Until the courts put a stop to it, public debate over same-sex marriage displayed American democracy at its best."

"When the Fourteenth Amendment was ratified in 1868, every State limited marriage to one man and one woman, and no one doubted the constitutionality of doing so."

"The Federal Judiciary is hardly a cross-section of America."

Scalia argued that because most of the Justices were from the two coasts, their opinions didn't represent America, conveniently forgetting that no one working in Washington actually represents America.

"Not a single [Supreme Court Justice is an] evangelical Christian."

And Neil Armstrong never actually landed on the moon — it's all a conspiracy!

"These Justices know that limiting marriage to one man and one woman is contrary to reason."

"The opinion is couched in a style that is as pretentious as its content is egotistic."

Hippies have apparently made a comeback.

"We move one step closer to being reminded of our impotence."

We have to retrieve our masculine patriotism from the gays!

Of course, when all was said and done, Scalia was probably just jealous.