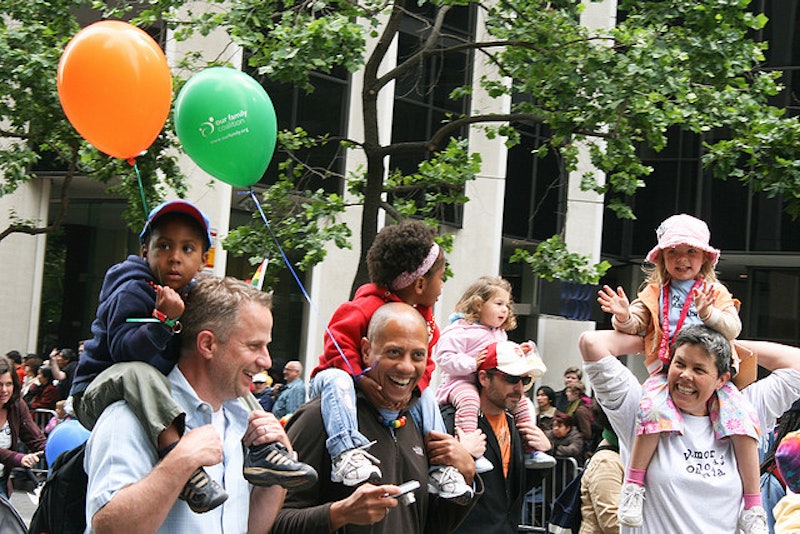 As you may have heard by now, today marks one big win for love as the Supreme Court of the United States made the historic ruling that states can no longer ban same-sex couples from marrying. Just recently, a University of Colorado study denounced one major point anti-gay followers have been repeating throughout that years, and said that children of same-sex parents are not negatively impacted by who their parents are. Children of same-sex parents actually experience no difference in social and behavioral outcomes compared to children of heterosexual or single parents.

Earlier this week, new research was released further proving the same exact thing. Children who are raised by same-sex couples are no worse off than children raised by parents of the opposite sex. The study, which was conducted by researchers at the University of Oregon, looked at 19,000 studies and articles dealing with same-sex parenting from the years 1977 to 2013. It was found that despite some initial disagreement between scientists in the '80s and '90s, by 2000, it seemed to be agreed upon that there were no significant differences between same-sex and different-sex parenting when it came to the psychological, behavioral, and educational outcomes of the kids.

Ryan Light, a sociology professor at the University of Oregon said, “Consensus is overwhelming in terms of there being no difference in children who are raised by same-sex or different-sex parents. … Across the board we find the iterative suggests there’s no significant difference. To our knowledge, this is the most comprehensive analysis of this type on this issue.”

According to Gary Gates, the Research Director at the Williams Institute, UCLA School of Law, people have been making the argument against same-sex coupling and parenting for years, despite proper evidence.

Despite the naysayers and many setbacks in the past, the Supreme Court has finally ruled in favor of same-sex marriage nationwide.

Here are some of your favorite celebrities reacting to this momentous event, because #LoveWins: