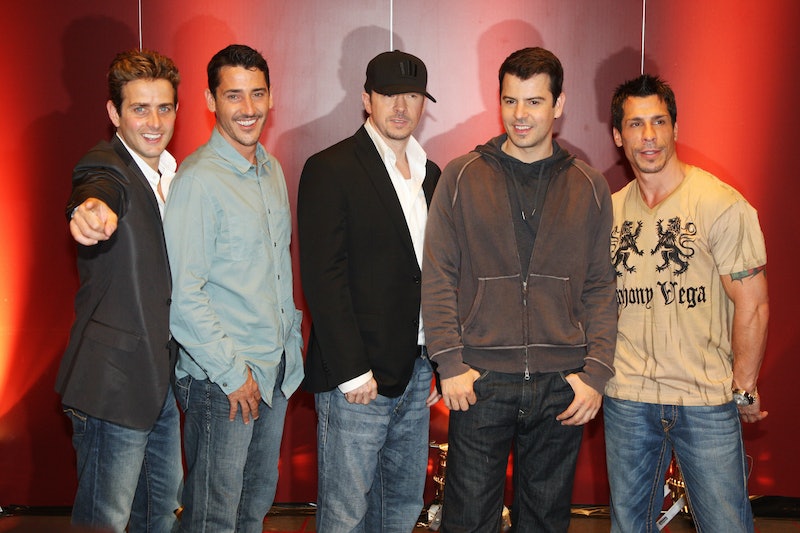 The Supreme Court's decision declare state bans on same-sex marriage unconstitutional in every corner of the country inspired an '80s and '90s boy band legend to change his name. Well, on social media, at least. New Kids on the Block star Jonathan Knight added his long-time boyfriend's last name to his on Instagram and Twitter, making him Jonathan Knight-Rodriguez. Sweet! Knight, 46, and Harley Rodriguez, 41, who is a fitness trainer, have been a couple for more than seven years. Knight came out as gay publically in 2011 and he and Rodriguez became a very public item when they competed in the 26th season of The Amazing Race earlier this year.

In an interview with CBS, Rodriguez revealed that he and Knight met through a mutual friend in Los Angeles. He cutely admitted that Knight's complaining drives him bananas and that their downfall on The Amazing Race would be the fact that they can be indecisive. Knight agreed with their indecisive nature, lamented about how Rodriquez is chronically late for everything, and said this amazing thing about what he hoped appearing in the show together would do for their relationship: "I hope to gain skills that will forever enhance our communication and life together." This paired with the name change makes it sound like a wedding could be right around the corner, right?

Knight also gave his bandmates a big shout-out on this amazing day with a lovely photo of himself and Donnie Wahlberg.

All of you NKOTB fans will be delighted to know the guys made Knight proud today with their reactions to the historic news.