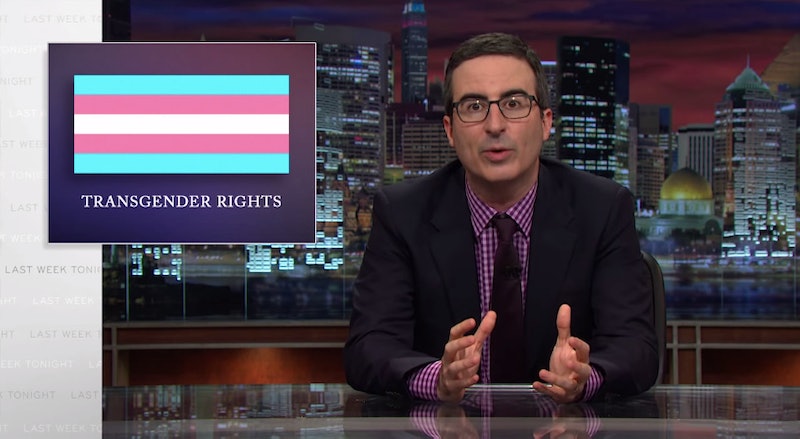 Friday was a big day for the LGBTQ community as the U.S. Supreme Court legalized gay marriage nationwide. But comedian and late-night host John Oliver took the time to focus on one letter of the group, namely the country's transgender population whose rights still lag behind the others. There has been a lot of progress in transgender visibility and understanding recently — just look at the highly public welcoming of Caitlyn Jenner and the overwhelming love for actress Laverne Cox. But, as Oliver explains transgender rights, celebrating doesn't necessarily mean the same thing as real support.

Media outlets continue to struggle with how to talk about transgender people, often relying on questions that cross the line between informative and invasive. And some people, including those in the media, might not know what "transgender" even means, which is why Oliver breaks it down.

What about what you should call transgender people? What about the pronouns? Duh, call them whatever they want! With Jenner's announcement, GLAAD sent media outlets notices on the proper way to cover the transgender community. And, Oliver points out, we've been giving that courtesy to celebrities for decades. From Marilyn Monroe to Hulk Hogan, we've long allowed people to redeclare their identities. Take, for instance, Diddy (whose real name is Sean Combs), "and most people don't even like him."

Now, the government and institutions like the DMV need to catch up with the times and offer transgender men and women the same equal rights that are being declared nationwide. The DMV has been blasted for making transgender people remove makeup and wigs so they don't hide their "real identity." And when it comes to the military, transgender people currently aren't allowed to enlist, even though both Secretary of Defense Ash Carter and President Obama said they were open to allowing it. But one study, Oliver says, estimates that there are around 15,500 transgender people who are currently serving, and some have found solace abroad. But as Oliver notes:

It is not a great sign for how we treat transgender people that Afghanistan is a place where you can be yourself.

Our country's failure to seriously and tactfully address what it means to be transgender is perhaps most apparent when you talk about bathrooms. Across the country, people are proposing so called "bathroom bills," which would force people to use restrooms according to the gender assigned to them at birth rather than the gender they identify with. Supporters of these bills argue the move will protect children from threats such as predators abusing the system, but opponents say bathroom ordinances would only exacerbate identity struggles in transgender people. That's why Oliver makes this great point.

It is so much easier for everyone when people are allowed to use the bathroom that matches their gender identity rather than one that might match the genitalia they were born with. That is why the little pictures on bathroom doors are stereotypical representations of men and women, and not biologically accurate depictions of penises and vaginas. Because that would be troubling for children.

That brings us to Oliver's final point — that we as a country need to figure out a way to turn our support into real change for the transgender community. The first step is changing the conversation.

That dynamic of praising a transgender person's courage and then not actually supporting them speaks to the fact that we are weirdly comfortable celebrating transgender people while simultaneously dehumanizing them at the DMV, pinning awards to them as we drum them out of the military, and constantly quizzing them about their genitals.

More like this
How To Fight For Reproductive Rights, Based On How Much Time You Have
By Courtney Young
Jake Daniels Just Became The UK’s First Active Football Player To Come Out As Gay Since 1990
By Sam Ramsden
Simply Sayo Doesn’t Consider Kpoetry Hard Work
By Jessica Morgan
Harry Styles Called For "Backlash" In Powerful Statement On Abortion Rights
By El Hunt
Get Even More From Bustle — Sign Up For The Newsletter