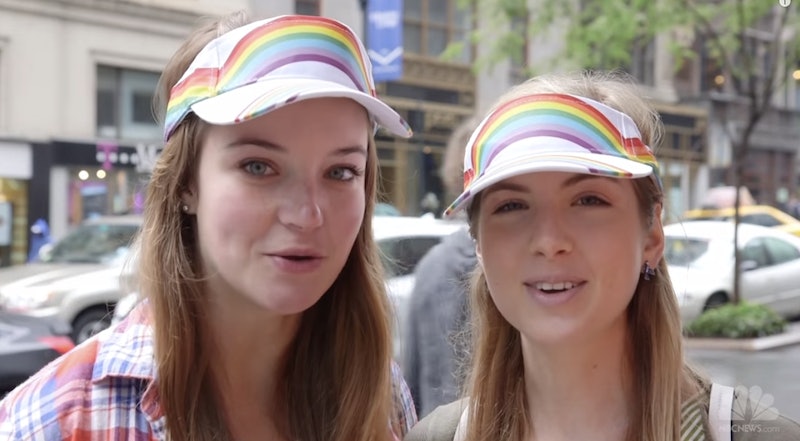 The 22,000 people who marched in the New York City Pride Parade yesterday had something extra to celebrate: The Supreme Court’s Friday ruling that declared marriage bans unconstitutional and named marriage as a constitutional right for all Americans, regardless of sexual orientation. Accounts of NYC Pride describe the parade as a scene of jubilation, an idea that is supported by this video from the parade by NBC News. The video shows NYC Pride Parade attendees reading the SCOTUS decision to legalize gay marriage, and their smiling, happy faces, combined with the closing words of Justice Anthony Kennedy’s opinion on the case will have you smiling along with them.

For those of you who need a refresher, this is Justice Kennedy’s already-iconic closing paragraph, bound to be remembered both for its legal ramifications and for its moving description of marriage and what it means:

No union is more profound than marriage, for it embodies the highest ideals of love, fidelity, devotion, sacrifice, and family. In forming a marital union, two people become something greater than once they were. As some of the petitioners in these cases demonstrate, marriage embodies a love that may endure even past death. It would misunderstand these men and women to say they disrespect the idea of marriage. Their plea is that they do respect it, respect it so deeply that they seek to find its fulfillment for themselves. Their hope is not to be condemned to live in loneliness, excluded from one of civilization’s oldest institutions. They ask for equal dignity in the eyes of the law. The Constitution grants them that right. The judgment of the Court of Appeals for the Sixth Circuit is reversed. It is so ordered.

These rainbow-bedecked parade goers read these words with conviction and happiness, from that simple opening line:

To that final, resonating declaration:

Watch the video in full: