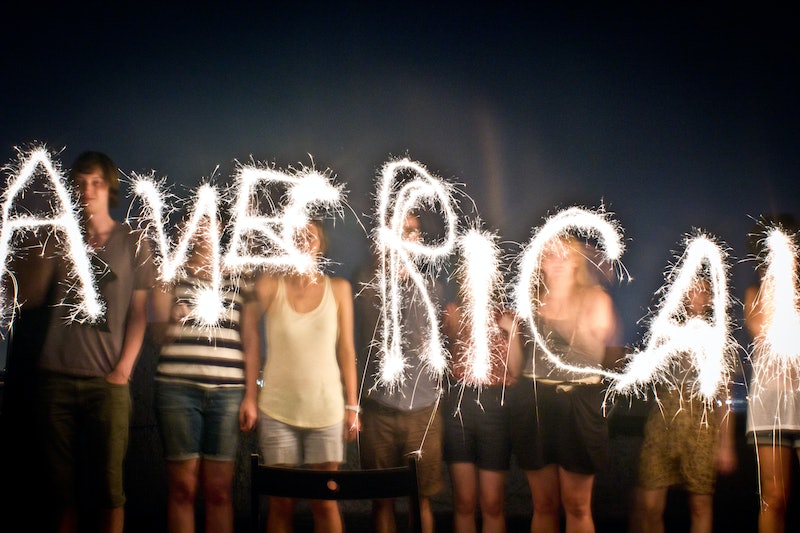 July 4th isn't only a day for working the grill, running through the sprinklers, and making red, white, and blue desserts (though, all of these are obviously amazing too) — it's a day for celebrating America's independence, and more than that, America's spirit. These 15 patriotic quotes for the Fourth of July get at the heart of American values, and while many of them are utterly stern in their demeanor, they manage to be just as inviting, inspiring, and participatory at the same time.

You'll notice that many of these wise words came from America's wisest minds, a.k.a, our presidents. While there is so often a political divide in America, these patriotic quotes manage to cover the distance. Whether you're a Democrat, a Republican, or anything in between, it really doesn't matter in regards to the quotes below. Virtue has no political party, and these words are filled with virtue and then some.

Take a read through these quotes, and if you're feeling ambitious, pick one out to recite to your friends and family on the Fourth. It may seem a little cheesy at first, but I have a feeling that any American could do with a little inspiration between scarfing hot dogs and staking out seats for the local fireworks show. At the very least, maybe you can post one on your Facebook wall (...people still use Facebook, right?). Think how perfect it would be paired with that photo of you standing in front of the American flag Lana Del Rey style. Am I right? Of course I'm right.

1. "America was not built on fear. America was built on courage, on imagination, and an unbeatable determination to do the job at hand." — Harry S. Truman

2. "Patriotism must be founded on great principles and supported by great virtue." — Henry Bolingbroke

3. "There is much more to being a patriot and a citizen than reciting the pledge or raising a flag." — Jesse Ventura

4. "My dream is of a place and a time where America will once again be seen as the last best hope of earth." — Abraham Lincoln

5. "I believe our flag is more than just cloth and ink. It is a universally recognized symbol that stands for liberty, and freedom. It is the history of our nation, and it's marked by the blood of those who died defending it." — John Thune

7. "Let every nation know, whether it wishes us well or ill, that we shall pay any price, bear any burden, meet any hardship, support any friend, oppose any foe to assure the survival and the success of liberty." — John F. Kennedy

8. “There is nothing wrong with America that cannot be cured by what is right with America." — Bill Clinton

9. "We, the People, recognize that we have responsibilities as well as rights; that our destinies are bound together; that a freedom which only asks what's in it for me, a freedom without a commitment to others, a freedom without love or charity or duty or patriotism, is unworthy of our founding ideals, and those who died in their defense." — Barack Obama

10. "The greatness of America lies not in being more enlightened than any other nation, but rather in her ability to repair her faults." — Alexis de Tocqueville

12. "America's fighting men and women sacrifice much to ensure that our great nation stays free. We owe a debt of gratitude to the soldiers that have paid the ultimate price for this cause, as well as for those who are blessed enough to return from the battlefield unscathed." — Allen Boyd

13. "Patriotism is voluntary. It is a feeling of loyalty and allegiance that is the result of knowledge and belief. A patriot shows their their patriotism through their actions, by their choice." — Jesse Ventura

14. "I look forward to a great future for America — a future in which our country will match its military strength with our moral restraint, its wealth with our wisdom, its power with our purpose." — John F. Kennedy