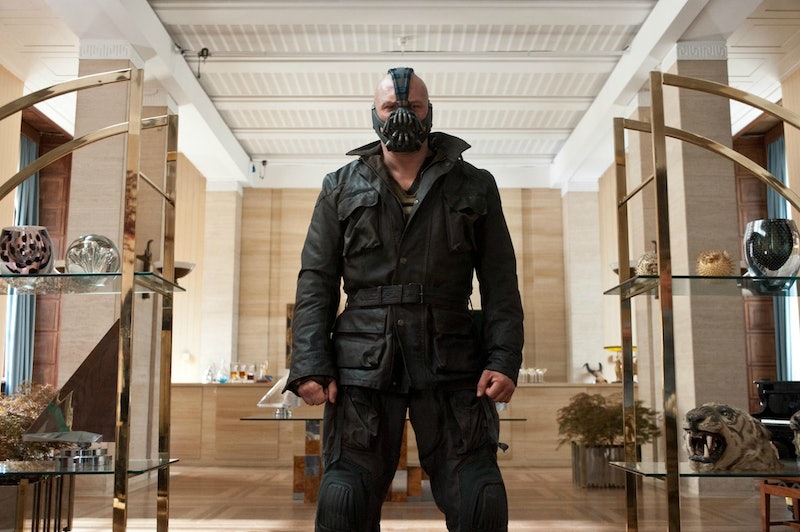 On Wednesday, everyone starting freaking out after the New York Stock Exchange temporarily suspended all trades reportedly due to a technical glitch. Many people started assuming the worst, like cyber terrorism, especially after United Airlines grounded flights worldwide and the Wall Street Journal's homepage cited an error message. Well, some individuals went a step further and decided to really panic by blaming it all on Bane. Yes, The Dark Knight Rises character played by Tom Hardy.

To be clear, no, they don't really think Bane is to blame; they're just having fun with the news on Twitter. And, for the record, according to Justice Department officials who spoke with NBC News, no link was been found between the United and NYSE events. Also, there is no evidence connecting the incidents to hackers.

So, why Bane? Well, for those who've watched the Christopher Nolan movie, you definitely recall Bane and that stock exchange scene. He enters the Gotham stock exchange like the madman he is, scares everyone out of their minds, and does it all quite masterfully.

Now, the NYSE halt is getting blamed all on Bane. You pull a stock market heist once and then everything that goes wrong in the trade world is automatically your fault. Sorry, Bane, but that's just how the world works. Check out some of the hilarious tweets below.

Now, if someone dressed as Bane would actually walk by the NYSE that would most definitely break Twitter.