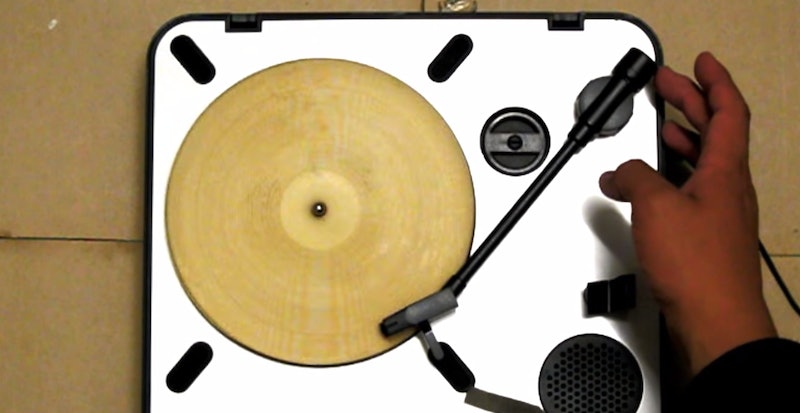 Have you ever wondered if a tortilla could play music? No? Well apparently other people have wondered it for you, so don't worry if the thought has never crossed your mind. Generally, my only tortilla related thoughts are "What delicious things can I put in it?" and "How quickly can I get it in my mouth?", so I don't blame you for not having considered alternate uses. After a joke Vine about putting a tortilla on a record player went viral, suggesting that if you did so it would automatically play the instantly recognizable “Jarabe Tapatío,” or better known "Mexican Hat Dance," people's thoughts about the capacity of tortilla diversified past "I'll have guacamole with that." And then, obviously, someone went and put the damned tortilla on a record player, and proved that you can, indeed, play music from it.

Rapture Records, a vinyl obsessed YouTube channel, conducted the experiment. They began with a simple, edible, uncooked flour tortilla, as "Cooked tortilla are lumpier in comparison and are more prone to shredding when played." They then etched the tortilla with a laser, no big deal. Then viola! If you listen very carefully, the sweet sounds of the Mexican Hat Dance will begin to play...

Meanwhile, here are some more important things we can do with tortillas:

1. Make tacos and eat them

2. Make burritos and eat them

3. Make enchiladas and eat them

4. Make fajitas and eat them

More like this
Here’s What Sarah Jessica Parker’s Canned Cosmo *Actually* Tastes Like
By Emma Garza
8 TikTok Pasta Recipes To Try Out At Home
By Emma Garza
If Your Refrigerator Is A Mess, These 25 Organizing Products Can Help
By Courtney Young
Starbucks’ Chocolate Cream Cold Brew Tastes Like This Retro Candy
By Emma Garza
Get Even More From Bustle — Sign Up For The Newsletter