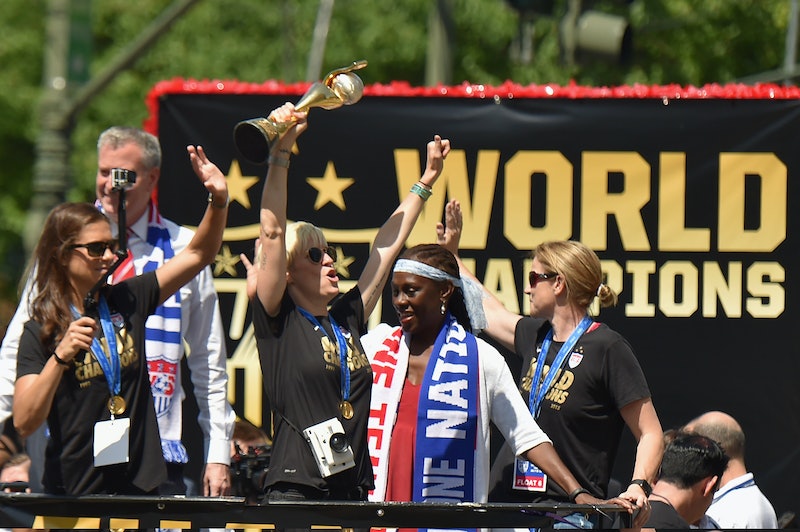 All hail the conquering heroes, right? On Friday morning, the city of New York welcomed the United States Women's National Soccer Team (USWNT) home after a long World Cup tournament with a ticker tape parade, the first time an all-woman sports team has received that honor. And if you're curious what that's like — to roll down the so-called Canyon of Heroes with an entire city's worth of people cheering your achievements — never fear! Because Women's World Cup players' parade tweets will give you a little behind the scenes glimpse.

If you're not a huge sports fan — even though the United States well and truly caught Women's World Cup fever during the climactic final, with through-the-roof TV ratings — you should know that this team rolled through the tournament in historic fashion. They'd allowed only one goal going into the final match against Japan, and even though they then gave up two more in the midst of a 5-2 rout, one them was an accidental own-goal.

Simply put, this was one of the greatest soccer — or football, whatever you want to call it — teams to ever take the field on an international stage, and they deserved every bit of the praise they received on Friday. Here are some tweets from the players that show just how epic a parade through New York City can be.

More like this
Chelsea Woody On Shattering Stereotypes In Surfing
By Leah Groth
How The City Healed Five Years On From The Manchester Arena Attack
By Ella Glover
Jake Daniels Just Became The UK’s First Active Football Player To Come Out As Gay Since 1990
By Sam Ramsden
What Is Jeanie Buss' Net Worth? The Lakers President Is Uber Rich
By Hugh McIntyre
Get Even More From Bustle — Sign Up For The Newsletter