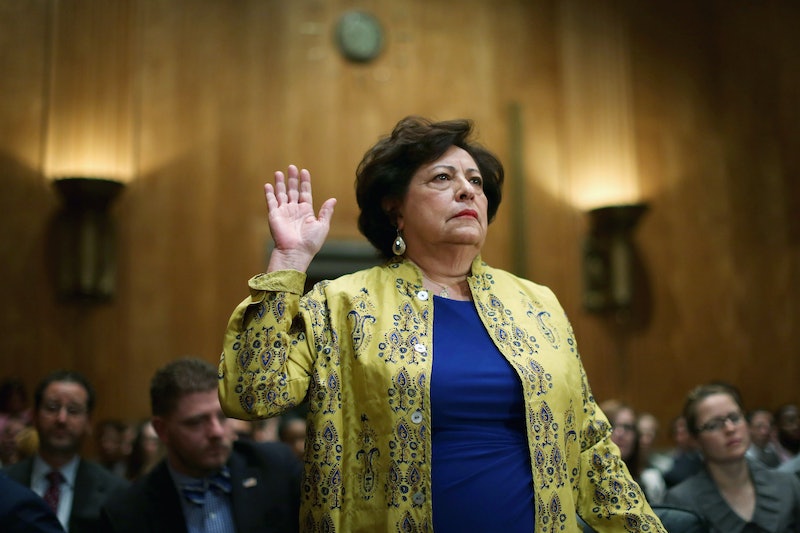 On Thursday, the federal Office Of Personnel Management, which handles the background checks of federal employees, announced in a somber statement that roughly 25 million people's private information, like Social Security numbers and home addresses, had been lost to hackers. The hack itself wasn't news — the 2014 hack, which officials believe is the work of Chinese hackers, was already known to have affected roughly five million people — but the OPM revealed that far, far more people were affected than initially thought. In the wake of the incident, now ex-OPM director Katherine Archuleta resigned.

The New York Times reports that Archuleta, who had been in the position for a year and a half, went to the president's office the day after the scale of the hack was revealed and resigned her post, noting that — according to the Times — a new leader should be put in place to "move beyond the current challenges." The president accepted her resignation, and it was announced later Friday by a federal official, who spoke to the Times.

The OPM had already notified the close to five million people whose information (and spouse and family's information) the agency believed was compromised in the 2014 hack, but given the scale of the latest development, it has not yet let people know if they were affected, the agency wrote on its website Thursday. "We will begin to notify people affected by the background investigation incident in the coming weeks. At that time, you will be auto-enrolled in some services and will need to take action to enroll in others," it wrote.

More like this
Michigan’s Governor Is “Going To Fight Like Hell” To Protect Abortion Access
By Andrea Zelinski
How To Protect Your Digital Privacy If You Need An Abortion Post Roe v. Wade
By Kaitlyn Wylde
When Did Tamagotchi Come Out? In The U.S., 25 Years Ago
By Kaitlyn Wylde
How To Fight For Reproductive Rights, Based On How Much Time You Have
By Courtney Young
Get Even More From Bustle — Sign Up For The Newsletter