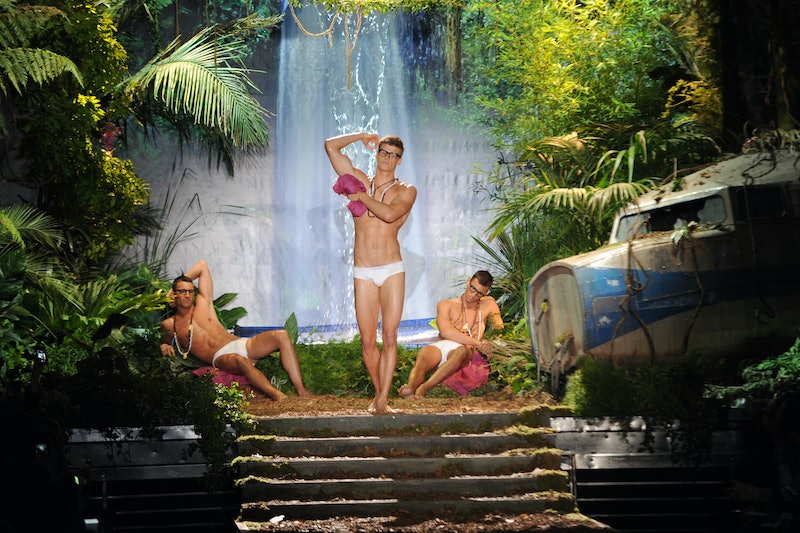 Monday's DSquared2 show in Milan was one of the more provocative things to happen during the menswear weeks (minus Dolce and Gabbana's streaker). The designers described their inspiration as "James Dean flying in his little plane over the Bermuda Triangle… he crashes down and lands on this beautiful paradise," which is the kind of explanation that could really mean anything, or nothing, and is exactly why so many people still roll their eyes whenever they hear the word "fashion."

Here's what James Dean crashing a plane looks like according to DSquared2: Handsome men clad in tighty whities, bathing in a waterfall. Fashionista called it "the best thing to happen during fashion week, like, ever." But is it? Upon seeing images from the show, I had two thoughts. One, should we really be having fashion shows inspired by someone who died in a car crash crashing a plane? And, two: Would Fashionista and the like be applauding just as loudly if the tables were turned, and it was lingerie-clad women bathing each other?

You can argue that this breed of objectification already happens to women all the time, pointing to the most obvious example of the Victoria's Secret Fashion Show. However, "tit for tat" or "payback" is never the best attitude to have, and double standards are never good for anybody.

I am not completely against DSquared2's concept, but I would have loved to see them do something more innovative than just "chiseled men bathing each other with palm trees behind them." After all, have we not already seen that image or something smilar a thousand times? Sure, it's sexy, but it's so obviously sexy that it's almost boring. Fashion should be about creativity, not adhering to overused tropes because they'll garner more attention.