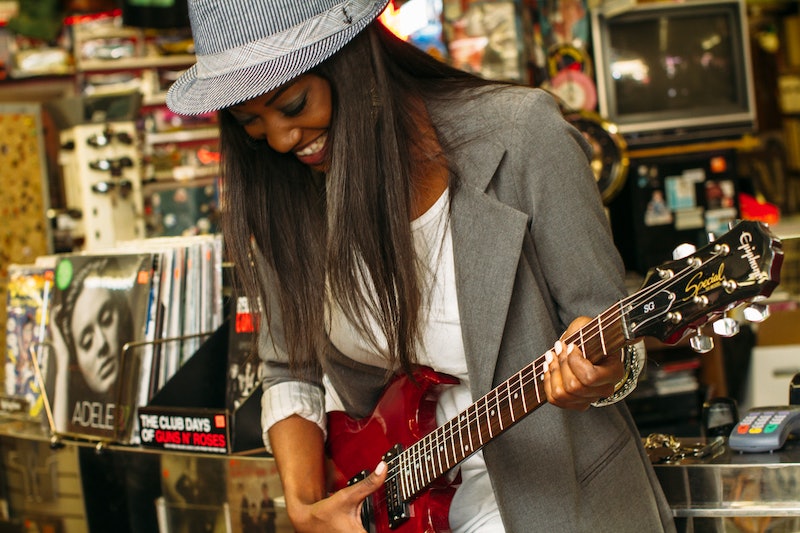 The idea that there must be a neurological basis for musical genius makes perfectly good sense. Surely a Beethoven or an Mozart must have had grey matter of a significantly stranger, lumpier, or more creased fashion than us everyday idiots? It makes sense for the brain chemistry and structure of a concert pianist to be fundamentally different from ordinary tone-deaf brains, and to have been that way since birth. But is it actually true? Are some people born more musical than others?

The answer is ... sort of. It looks like your piano teacher was right: becoming a musical genius isn't just a matter of raw talent, it comes down to years of ruthless practice and learning that can literally change the shape of your brain. The difference between musicians' brains and non-musical brains is real — they use their brain hemispheres differently and tend to use creative problem-solving — but it's still not clear how much of that is due to practice, and how much is based on innate shape. Mozart was writing music from the age of four — so how much is nature and how much is nurture?

We don't know very much about the neurology of genius and talent. Geniuses come along very rarely, and many of history's most brilliant minds didn't offer their grey matter to interested observers for the sake of science. But if you've ever wondered how a musician's brain works, where music goes when it enters your head, and if you can turn yourself into Lennon or McCartney via some fancy neural engineering, read on. Preferably with some tunes blasting.

Do We All Have A Musical Brain?

Generally speaking the "musical brain" is kind of a misnomer; we've all got musical brains, of one kind or another. Even if you think you're not particularly au fait with the latest hits or can't sit through an opera without snoring, your ears are still one of the most sensitive of the senses. But different parts of the brain react to different kinds of sound.

Take the human voice. We pick up huge volumes of data from tone and volume in human expression — particularly in tonal languages, like Mandarin, where a huge amount of meaning is enclosed in vocal pitch and tone. In fact, there's some evidence that speaking a tonal language may actually boost the musical areas of the brain. (It happens with accents, too. I'm Australian; the lilt at the end of my every sentence once led my husband to believe that I was constantly asking questions.) It's not the same as interpreting musical notes, but it does still involve a lot of sound interpretation in the brain.

Studies have shown, however, that the brain actually separates listening to voices from listening to music — because an impaired ability to do one doesn't mean you also stop being able to do the other.

Where Does Music Live Inside Your Head?

The "bits" of the brain responsible for music interpretation and enjoyment are tricky to pin down. Monitoring the brain's electrical activity while the subject listens to music has shown that both hemispheres of the brain are active. While the temporal lobe — the bit of the brain mostly devoted to sound — appears to be the most dominant brain part when it comes to musical ability and appreciation, it now looks like the brain's response to music and its creation is hugely diverse.

A study done on patients with damage to different parts of their brains found something very interesting: rather than there being a "music center" in the brain, different bits of it do different jobs. The researchers divided music into five elements — pitch, interval, key, contour, and rhythm — and tested what patients could and couldn't identify. The results were pretty remarkable. People with damage to their right temporal lobes had trouble with key and contour, while damage to the left meant a struggle only with the key.

But it's not all clear-cut. Another study found that advanced understandings of music are probably not determined by your biology. A Melbourne scientist played the gamelan, an Indonesian percussion instrument, to a group of musicians and asked them to find the pitch. Western musicians couldn't, while those trained in the use of the gamelan could. Another study found that professional musicians with years of training use the left hemisphere of their brain while listening to harmonies, while non-musicians use their left. So musicians aren't born with all this stuff innately embedded in them; they learn it, over a long period.

How Are The Brains Of Musicians Different?

If you want to boost your cognitive performance, it looks like learning an instrument — and doing all the slogging, boring scales that come with it — might actually be a huge boost to the brain's overall health. A study released by TED showed that playing music actually works large areas of the brain, from the visual cortex to bits devoted to movement. And it's been shown to kick-start memory.

Another advantage? Studies of musicians versus non-musicians show that musicians simply have more grey matter in areas of the brain devoted to motor skills and interpretation of sensory information. The most likely explanation? Years and years of practice and refinement have literally changed the shape of musicians' brains, exaggerating what may have been minor differences into full-blown radical weirdness.

This answers one question: the difference between musical and non-musical brains isn't just down to one innate neurological advantage. The brain is plastic and evolves over our lives, and musical brains will just become more musical if the lives they lead are full of C-sharps and tuning forks.

As for genius? It's increasingly looking like any innate musical talent is partially genetic: if an identical twin is highly musically talented, it's very likely their twin will be, too. Hence why there are so many music dynasties in the history of music. So unless you're related to a concert pianist, you may not have much of a chance of being the next Rachmaninoff. But tinkle the ivories all the same.