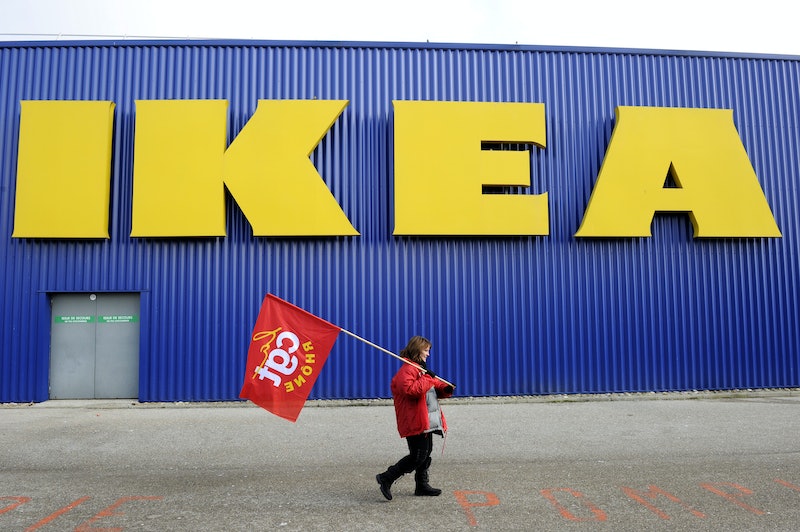 IKEA, the furniture haven for college students and budding yuppies, has issued a massive recall of dressers. The Consumer Product Safety Commission said in a statement Wednesday that the MALM chests of drawers for both adults and children from IKEA had been involved in accidents that killed two children. Both incidences of death involved a MALM chest of drawers falling onto a small child; the first incident occurred in February 2014, the second only months later in June 2014. But how do you know if your own IKEA dresser needs a fix?

IKEA has acknowledged the hazard of the MALM, and is offering free wall-mounting "repair" kits to U.S. consumers with MALM chests of drawers, and all children's dressers taller than 23.5 inches and adult dressers taller than 29.5 inches. The CPSC has said that use of this furniture should be discontinued immediately until a wall-mounting can be secured. IKEA says that securing the furniture to a wall will prevent it from tipping over, and dramatically increases the safety of the product. You can order them here, or get them at your nearest IKEA store.

We all know that IKEA furniture either seems like it would still be perfectly intact after getting hit by a tornado, or feels like it could break the moment you secure the final screw while assembling it. Here are some indicators that your IKEA dresser might need a repair.

If You Have Children In Your Home

Both of these incidents of tragic deaths involved two young children, ages two and 23 months. Since children may be inclined to climb on furniture, or would be unable to remove themselves out from under furniture that falls on them, it's best to play it very safe and secure any dresser to the wall. Same if you have pets.

If Your Dresser Is Not Currently Secured To A Wall

In general it is recommended that dressers (and most vertical standing IKEA furniture) gets fastened to the wall. I lived in an apartment where my roommates and I had a combined 900 books in our home, and you bet our IKEA shelves were bolted to the living room wall. Furniture made of lightweight materials that are holding heavy items will be more likely to break and potentially fall over or collapse.

If The Dresser Is Older And Showing Signs Of Wear

Just because your dresser has been holding up for a long time doesn't mean that you shouldn't seriously consider fastening it to the wall, just to be sure. My old MALM has been very reliable, but having slung it around in several moving vans over the years, I am planning to get myself a kit to fix it to the wall.

If Your Dresser Is Chock Full Of Stuff

I don't know about you, but my IKEA dresser is fully loaded. The drawers are completely stuffed with clothes and random junk that I haven't cared to organize over the last couple of years. All that weight could potentially make a tall dresser (like mine!) a little more wobbly and perhaps likelier to fall over. Either be sure that your dresser isn't carrying more than its maximum load, or just secure it to the wall. Or probably both.

So, now that we have official confirmation from IKEA and the Consumer Product Safety Commission that it's really for the best to secure these dressers to the wall, I'm going to go ahead and fully endorse that recommendation. Too much is at risk, and after spending a couple (or in some cases more like seven or eight...) hours putting together a piece of IKEA furniture, taking another ten minutes to fasten it to the wall should be no sweat.

More like this
An Honest Review Of The TikTok-Famous WalkingPad
By Kaitlyn Wylde
How To Decorate Your Home Like A Coastal Grandmother
By Emma Garza
If Your Refrigerator Is A Mess, These 25 Organizing Products Can Help
By Courtney Young
The 11 Best Sheets For Night Sweats
By Megan Gray
Get Even More From Bustle — Sign Up For The Newsletter