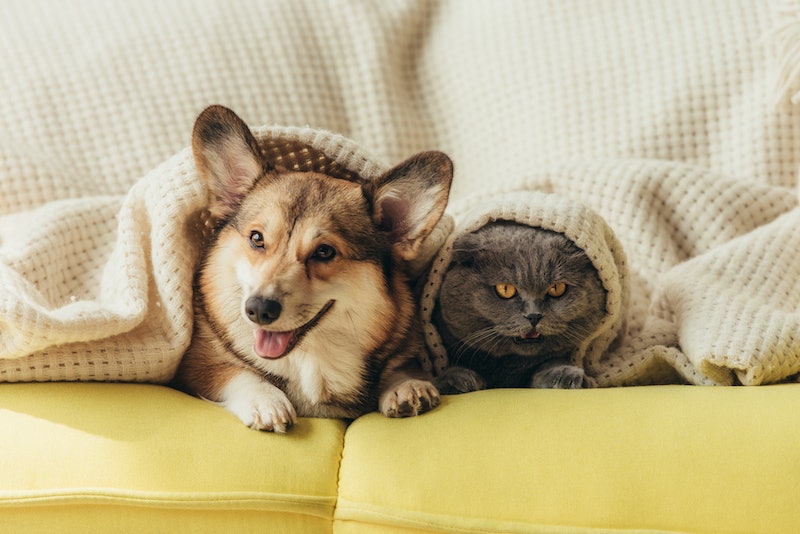 If you have ever looked at your beloved pet and wished that they could have the same rights people do, then I have just the new hometown for you: A town in Spain just voted to give dogs and cats human rights. The municipality of Trigueros del Valle now classifies pets as "non-human residents" — and not only that, but the vote was unanimous, too. To which I can say only this: Long may the interspecies friendships reign!

Trigueros del Valle has a population of about 330 people and is located in the Castile and León region of Spain. “Dogs and cats have been living among us for over 1,000 years,” said the town's mayor, Pedro Pérez Espinosa. “And the mayor must represent not just the human residents, but must also be here for the others.”

The act also contains a provision that forbids killing or disfiguring any "non-human resident," which could be used to prevent bullfighting, a contentious issue in recent years throughout Spain.

But whether or not the new protections could be used as an anti-bullfighting measure, animal rights groups — sorry, non-human resident rights groups — certainly have reason to cheer.

Of course, the new status quo does carry with it certain questions. As the Independent points out, it is unclear what might be the status of dogs or cats who are old or sick and would normally be put down as a matter of compassion. Given that physician assisted suicide is illegal in Spain, would such animals still be put to sleep?

Also, what is the policy for putting a litter of kittens or puppies up for adoption? Would the mother have to somehow sign them away herself? And what about father's rights? If the cats and dogs in question have no way of communicating who the father might be, are his rights terminated automatically in adoption cases? And I don't even want to think of the legal headache of selling a pet.

Though if we can start suing pets for damages for all the things they break or destroy, that might be nice. Assuming, of course, the pets have any way of actually paying those damages.

Overall, there are a lot of questions raised by giving animals the same rights as humans. But still, if you were a dog or cat, I think we all know where you'd like to be right now.

More like this
How To See The Lunar Eclipse On May 15-16, 2022
By Kaitlyn Wylde
Twitter Was Saying The Same Thing About Sam Ryder’s Surprising Eurovision Result
By El Hunt
The 10 Best Cat Puzzle Feeders
By Lauren Moison
My Picky Eater Dog Absolutely Devours This All-Natural Food
By Allison Berry
Get Even More From Bustle — Sign Up For The Newsletter