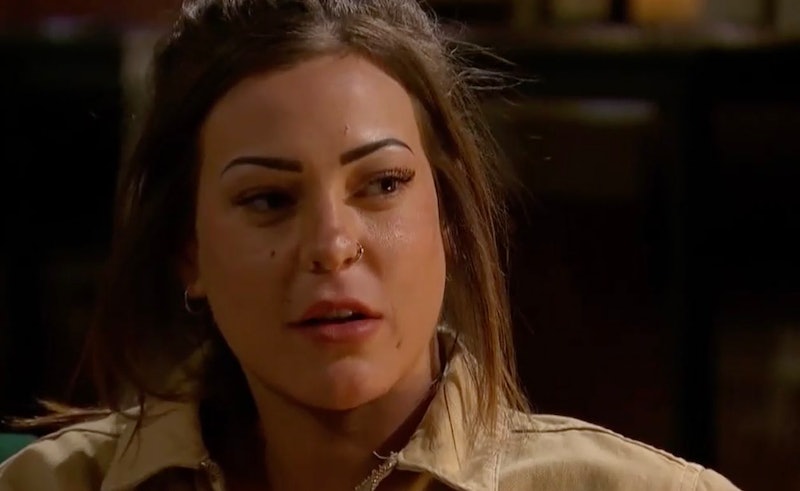 With only two episodes left in her season of The Bachelorette, Katie Thurston spent Monday night meeting her finalists’ families. Typically, this is a time for the remaining contestants to really shine and let the lead learn more about who they are. But in Blake Moynes case, his sister stole the show — at least as far as fans are concerned.

After Blake’s sister, Taylor Moynes, met Katie, she sat down with her brother to find out whether or not he’d said “I love you.” When he told his sister how quickly he was falling for Katie, she immediately called him out for basically finding “the one” three times in just a little over a year and a half.

“So this is the one now? Is this the one?” Taylor asked. When Blake responded, “Yes,” she went in. “Yeah, but you were so set before you even met Clare [Crawley]. You were like, ‘I love her, it’s gonna work.’ And then that was off the table in how long? And then Tayshia [Adams] came in, you’re in love again like right away. You get to the point where you just say that like, ‘She’s the one.’ Like, what do you mean?”

Taylor’s line of questioning clearly resonated with Bachelorette fans, and they took to Twitter to express their shock (and delight).

Other fans tweeted about how Blake’s mom and sister are actually the more likable members of his family.

And some just appreciated the shade.

Even Katie herself hopped on Twitter, teasing that, “If you think Blake’s sister is brutally honest.. just wait until the season finale..”

Guess Bachelor nation should get their memes ready for next week.

More like this
10 Photos Of The Wildest Limo Arrivals From 'The Bachelor' Premiere
By Brad Witter
A Guide To All Of Zach Shallcross' 'Bachelor' Filming Locations
By Brad Witter
Zach Swears He Didn’t Look Up Contestants Before The Bachelor Began Filming
By Brad Witter
Bachelor Zach’s “Dream Job” Has Nothing To Do With His Work In The Tech Industry
By Brad Witter
Get Even More From Bustle — Sign Up For The Newsletter
From hair trends to relationship advice, our daily newsletter has everything you need to sound like a person who’s on TikTok, even if you aren’t.