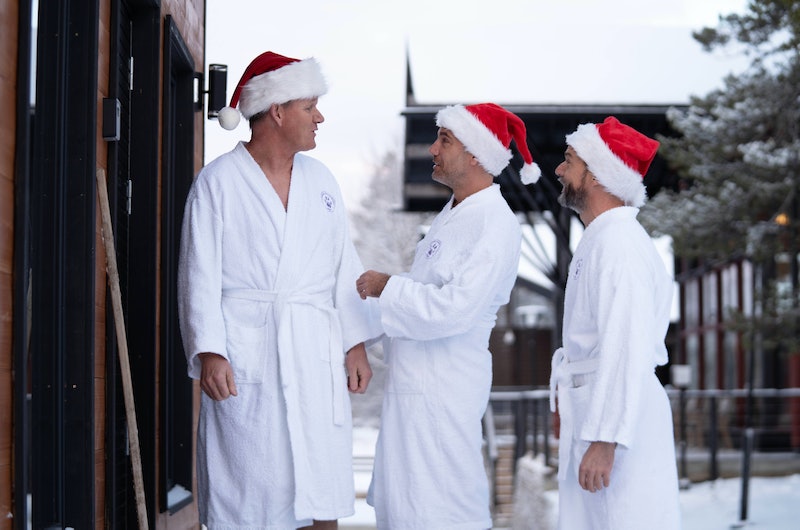 Gordon Ramsay, Gino D’Acampo and Fred Sirieix are coming back for another TV road trip and this time they’ll experience an “extraordinary culinary Christmas adventure.”

Available to watch on ITV Hub, the three amigos have three very festive missions to accomplish on the trip — which is bound to see some hilarious mayhem. For this year’s Christmas special, Gino has a letter he wants to hand deliver to Santa from his daughter Mia, Fred gets to witness the once in a lifetime wonder of the Northern Lights and, naturally, master chef Gordon is eager to try all culinary delights of the country.

The Christmas capers come after ITV confirmed another three seasons of the boys and their bants. Per Radio Times, Gordon, Gino and Fred will be getting two newly commissioned series, and two more Christmas specials.

“Another three years with Gino and Fred, are you kidding me? Just joking,” said Gordon, following the announcement. “Who knew, when we headed out to Italy in the summer of 2018, I would find friends for life in Gino and Fred? We have already shared some incredible adventures, amazing food and plenty of hilarious disasters and pranks as we’ve road-tripped across Europe, America and this winter in Lapland, and I seriously cannot wait to do it all over again and again and again!”

Though they really enjoy making fun of each other (and the odd fart joke) it seems like the trio really get on but how do Gordon, Gino and Fred know each other?

Well, the origins of the trio's relationships isn't exactly clear, however, I have reached out to the Road Trip stars representatives for comment, and will update with any information once it becomes available.

Prior to the debut of Gordon, Gino and Fred: Road Trip, which as The Sun reports, first began airing in 2018, Kitchen Nightmares star Ramsay and I'm a Celebrity Get Me Out of Here's D'Acampo also took part in a hilarious blind taste test on Ramsay's official Youtube channel, which could indicate the TV chefs were somewhat well acquainted. Either way, Gordon, Gino and Fred have become very familiar with one another over the past few years, and as their ITV series approaches its third series, fans can look forward to yet more hijinks from their upcoming Christmas road trip.

The second instalment of Gordon, Gino and Fred: Road Trip aired on ITV last year, and the boys hit the road across the United States for "the ultimate boys' road trip,". Speaking on ITV's This Morning, D'Acampo discussed the show's "hardcore" filming process, and revealed that production took place non-stop for an entire month.

Gordon, Gino and Fred: Desperately Seeking Santa aired on ITV on Wednesday December 16. If you missed the group's road trip shenanigans first time around, you can catch up with the latest and previous series on ITV Hub — and I couldn't think of a better way to prepare for what promises to be yet another fantastic watch.