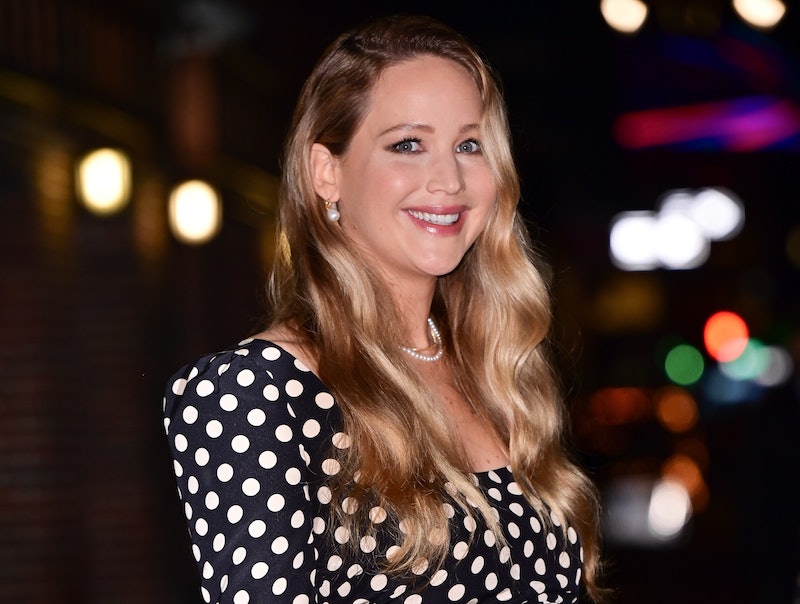 J-Law is giving fans rare insight into her new chapter as a mother. On Sept. 6, Jennifer Lawrence revealed the name of her first child, who she welcomed with husband Cooke Maroney in February. The actor divulged in her Vogue cover story that their baby boy’s name is Cy, who was named after one of Maroney’s favorite artists, postwar American painter Cy Twombly.

While Lawrence has kept the birth of her child private, Ellen DeGeneres accidentally revealed the baby’s sex in a May interview on her talk show, saying that she could often hear the actor talking to her baby. “I used to live in the house that you live in now when I started the show 20 years ago,” she explained. “Now I live next door to you, and I'm looking at you living in my house with a brand new baby... By the way, I do hear you sometimes talking to him, and it's really cute.”

In the new interview, Lawrence opened up about being a mother for the first time, explaining that she found it “scary” to talk about motherhood since women’s experiences are so different and even recalling worries that she wouldn’t love her child as much as her cat. After Cy was born, she didn’t have that problem. “The morning after I gave birth, I felt like my whole life had started over,” she said. “I just stared. I was just so in love. I also fell in love with all babies everywhere. Newborns are just so amazing. They’re these pink, swollen, fragile little survivors. Now I love all babies. Now I hear a baby crying in a restaurant and I’m like, ‘Awwww, preciousssss.’”

Lawrence also revealed that she suffered two miscarriages in her life before welcoming Cy, which is just one reason why she was so disappointed by the Supreme Court’s reversal of Roe v. Wade in June, which allowed U.S. states to restrict abortion access. “I remember a million times thinking about it while I was pregnant, thinking about the things that were happening to my body,” she said. “And I had a great pregnancy. But every single second of my life was different. And it would occur to me sometimes: What if I was forced to do this?”

Ahead of the midterm elections, Lawrence intends to ramp up her political activism tenfold, motivated by the Supreme Court’s actions, politicians’ lack of response to the loss of abortion rights, and her newfound concerns for her own child. But through the turmoil, Cy is a grounding force of love for the actor. I mean the euphoria of Cy is just—Jesus, it’s impossible,” she said. “I always tell him, ‘I love you so much it’s impossible.’”

More like this
Pamela Anderson’s Dating & Marriage History Could Be Its Own TV Series
By Jake Viswanath
Vanessa Hudgens Is Reportedly Engaged To Cole Tucker
By Jake Viswanath
Keke Palmer Shares The Sex Of Her & Darius Jackson's Baby
By Jake Viswanath
5 Wild Theories About Miley Cyrus’ “Flowers” Music Video
By Jake Viswanath
Get Even More From Bustle — Sign Up For The Newsletter
From hair trends to relationship advice, our daily newsletter has everything you need to sound like a person who’s on TikTok, even if you aren’t.