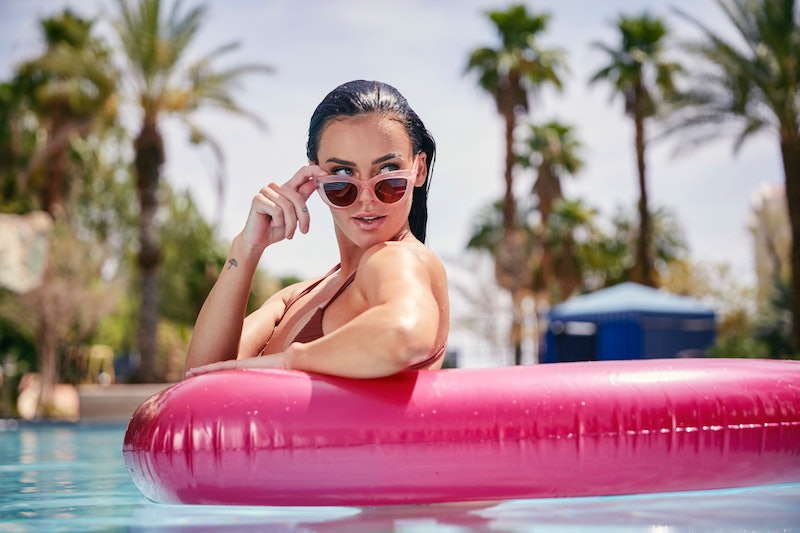 She may have been single for six years before Love Island, but it didn't take long for Kaitlynn Anderson to couple up with Carrington Rodriguez in the Season 2 premiere. Still, he's only beginning to get to know her, as are the fans at home.

According to her CBS bio, Kaitlynn loves bad food, dogs, festivals, Pilates, cooking, and adventure. She works in "promotions," which could truly mean anything. But for Kaitlynn, it seems to mean that she peddles SponCon for the energy drink Bang and the clothing company Fashion Nova. In other words: she's an influencer.

Kaitlynn's bio also says that she was born in a small town in Michigan, but she left that behind five years ago and moved to Las Vegas on a whim. That seems like a better fit for her self-described "big personality," though she insists she's actually pretty low-key. "Decided to post a pic of the realest me. In my natural habitat.... w. fried chicken. don’t let my ig fool you, I’m a pretty laid back bittch," she captioned a 2019 photo of herself mid-bite (though it should be noted she's wearing a Yves Saint Laurent T-shirt and a scrunchie on her wrist like any good VSCO girl).

It's hard to glean much else about Kaitlynn from her Instagram because it's just like 99% photos of her in swimsuits, though that makes it easy to see how she got cast on Love Island. If the show has one rule, it's to pack a bikini.

The rest of Kaitlynn's feed backs up exactly what she said in her bio. She loves music festivals:

And she is, indeed, a dog person. Her pup is named Zinfandel, like the wine, and they love to brunch together.

For anything else (including more of her expansive pool wardrobe), you'll have to keep watching.