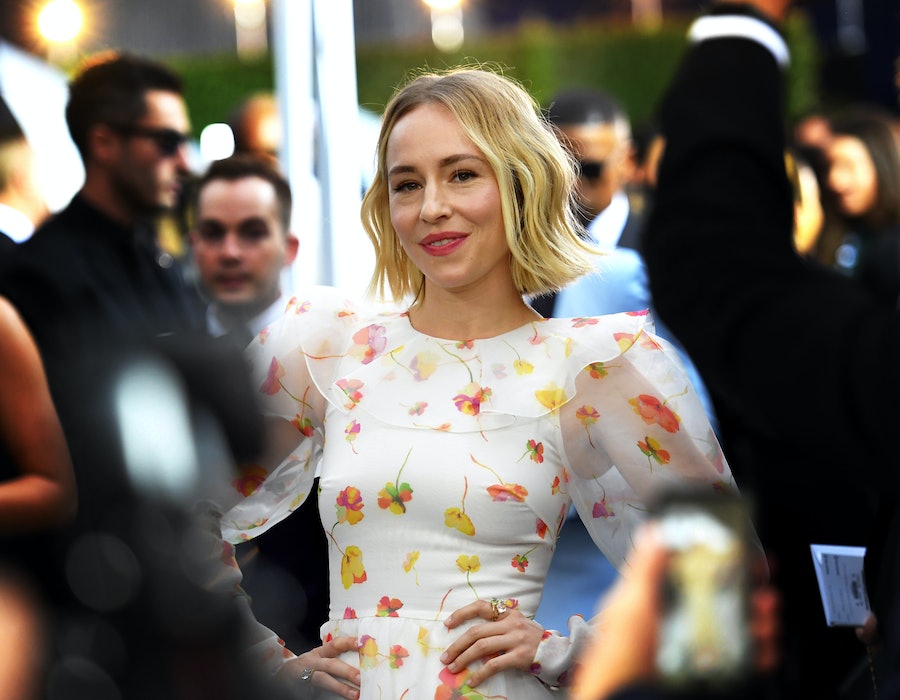 The Breaking Bad comparisons came fast for Barry when it premiered in 2018. Like Breaking Bad, the HBO dramedy follows a superficially sympathetic character — in this case, the titular Barry (Bill Hader), a traumatized war veteran-turned-hitman who dreams of being an actor — as he becomes increasingly violent. And his striving actor girlfriend, Sally Reed, was almost immediately declared unlikeable, just as Walter White’s wife Skyler once was. Vanity Fair labeled her “wretchedly self-absorbed,” while Refinery29 declared her “TV’s Least Likable Woman.” But Sarah Goldberg, who plays Sally, embraces her character’s shortcomings. “I didn’t want her to become a moral barometer for the show just because she’s the woman,” she tells Bustle.

Instead, Sally struggles with a the same ethical conundrum as Barry’s male characters, albeit without the added baggage of killing people for money: What does it mean to be a good person? If Breaking Bad sought to prove how easily an apparently upright citizen might turn evil, Barry asks its audience to consider what they have in common with a murderer. After all, as Goldberg says, “Nobody is just one thing.” Case in point? “Hitler loved his dog.”

Goldberg has much more insight into her character’s situation than Sally does herself. This season, Sally’s graduated from hustling acting student to television showrunner, and is struggling to manage the expectations of her demanding bosses — while turning into a demanding boss herself. But even if the actor and character don’t have much in common beyond their profession, Goldberg drew on her own observations of corporate culture and workplace harassment in Hollywood to inform her performance, suggesting they be incorporated in the show. Unlike Sally, who’s too wrapped up in her own anxieties to pay much attention to other people, Goldberg clearly watches other people closely, and uses what she’s learned to fuel her sometimes maddening, sometimes gut-wrenching performance.

Below, Goldberg speaks to Bustle about Barry’s ethical conundrums, the delicate dance of writing and performing a #MeToo storyline, and why she thinks Sally is like Succession’s Tom Wambsgans.

Half of this show is full of incredibly graphic violence. I think the half you are in is also really violent, but it’s more verbal, or passive aggressive. How do you think about that continuum, and how your half of the show interacts with the other half?

For me, it feels like it’s always been a metaphor for the thesis of the show, which is, “Am I a good person?” These characters are in really extreme circumstances that most of us wouldn’t find ourselves in. But if you take that element out, you’ve got a bunch of morally dubious people in these conundrums of, the right thing to do is just in front of me, but actually I’m going to choose the wrong thing because it’s going to get me the immediate result that I need right now.

Sally operates in much the same way. I’ve been very clear from the beginning: This is a complicated character who is not going to fall prey to the likability barometer. She is somebody who is as morally corrupt as the others on the show, and I didn’t want her to become the moral barometer for the show just because she’s the woman. There’s a violence in that part of the show, because there’s the same drive of, “I need a thing and I will do whatever it takes to get it.” And that’s what all the characters have in common.

I think that that passive aggressive violence that you bring up is really interesting. I really wanted to explore that this season in particular because Sally finally has a bit of power, and [the writers] want to know what do you do when you get a bit of power. Do you use it wisely? I thought a lot about Tom [Wambsgans] on Succession. He’s my favorite character on TV right now. Matthew Macfadyen [who plays him] is so good. He’s a perfect example of someone who’s constantly bullied, and you feel [for] him. He’s so vulnerable in those moments, but as soon as he gets a little whiff of power, he becomes the bully himself.

[The writers] really wanted to explore that with Sally. You see it very clearly when she’s talking to her bosses, and she’s nervous and wants to please, and then it flips [when] she’s with D’Arcy Carden, who plays Natalie, [who’s] playing her assistant — she’s ordering her around without a second thought. It’s not out of malice. It’s not intentional in any way. It’s like breathing in and out for her. And that sort of guile is cruelty.

Your character is running a show this season where all of the characters are women, and the power is rolling down from the top, and you can see everyone treating each other in these corrosive ways.

We thought a lot about it and I had a lot of input there, actually. I wanted to show exactly what you’re talking about. There’d be a temptation right now to show this as an all-female network [that’s] supporting [Sally’s] female-driven story. We could have made a very nice version of that. That doesn’t reflect reality in a lot of ways, and I felt, ironically, like it would be sexist if we let the female part of the show be the good, nice people. So I really fought for that because it’s really important.

It was really fun, fruitful stuff to play and represents a corporate structure, which is the world that Sally’s entered. She thinks she’s making art, and she’s met the world of commerce, and watching her try to catch up in real time is really interesting. Obviously, there’s no naming names, but the quote of Sally saying, “Can you cut up that into little bites” [to her assistant Natalie, about a meal] — that’s a real thing that I heard. So this is how people can speak to each other — and, again, not intentionally. In her mind, she’s empowering Natalie. She got her a great job.

There’s a scene in Episode 2 where Barry yells at Sally while she’s at work in a really inappropriate and frightening way, and Sally’s coworkers act like nothing’s happened. In the #MeToo narratives we’ve seen so far, it’s been easier to depict male networks of violence, which obviously do exist, but here, you see how it’s also much easier for women to stay quiet.

They have that moment where they’re like, “Well, what do we do? Who do we even talk to, and what did he actually do?” I think [that ambiguity is] pretty powerful, [as is] watching the most innocent person in the room, who’s new, Elsie [K. Fisher]’s character, [be] the one who’s like, “Guys, everybody stop. This thing happened.” In real time, when sexual harassment in the workplace happens, it’s like your brain can’t catch up with your body or vice versa. And I think that you don’t necessarily react in the way that you think you might, and it’s only later that you have the awareness and understanding of what happened.

Because of [Sally’s] past, she’s in a patterned behavior. To see this young woman come onto the scene and go, “Everybody stop, this terrible thing has happened,” and for the other characters to be worried for their jobs rather than [Sally] felt very real to me, and I thought was smart writing and pretty devastating, actually. It’s violent. It’s not so black and white when you get into talking about the #MeToo movement, like there was a male world and a female world, and one punctured the other. There was an ecosystem that we’re all still unpacking and trying to rectify. And the show does a brave job of showing that nuance.

Part of what I appreciate about the show is that everyone is awful, but everyone is shown in a human way. That balance between showing someone at their worst, but also being able to have sympathy for them — it’s back to what the show is really asking, which is how do you be a good person and what does that mean?

Exactly, and am I a good person, and what constitutes a good person? I think that it’s really interesting in this show that we go into that in detail to show these totally morally bankrupt people in these complex situations and watch them dig their own graves in a way — and that’s a metaphor. That’s not spoiling anything.

That’s the kind of work I want to make. That’s the kind of story that interests me. I don’t like seeing things in archetypes, and I think this show really undercuts your expectations of each of them at every turn. I think that’s the goal in showing the duality in all of them, and on a smaller level, we’ve all got that. We’ve all done things that we regret. We’ve all made mistakes. And those mistakes don’t necessarily define us as a person. These characters, the mistakes are a lot bigger, and I’d say killing people does define you, and it’s pretty bad and you should probably go to jail.

More like this
Everything To Know About True Detective Season 4
By Brad Witter
'Succession' Season 4 Could Be The Show’s Last
By Kadin Burnett and Gabrielle Bondi
'Dune: Part Two' Could Include A 'Little Women' Reunion
By Arya Roshanian and Alyssa Lapid
Lizzo Proved She’s Team Jeremiah During Her ‘The Summer I Turned Pretty’ Review
By Grace Wehniainen
Get Even More From Bustle — Sign Up For The Newsletter