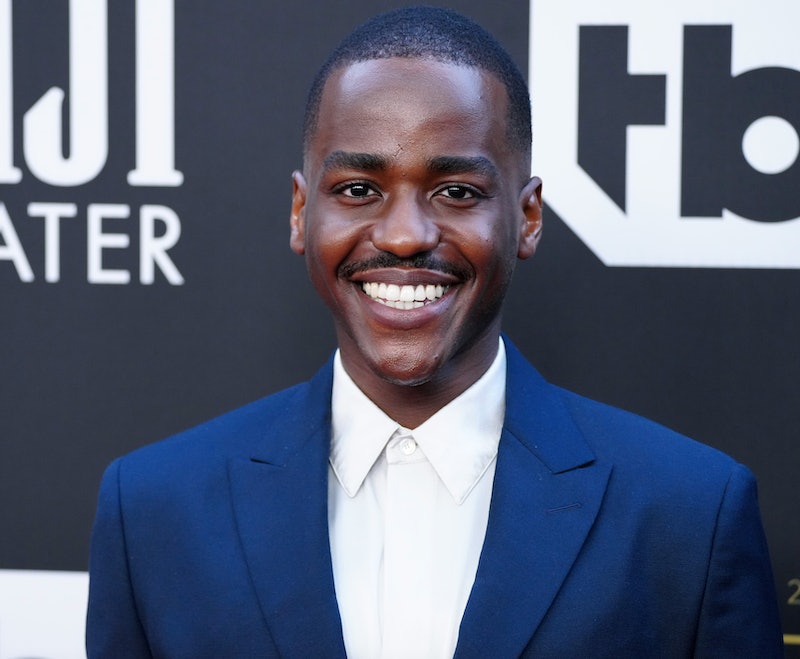 The TV BAFTAs were abuzz following the announcement that Sex Education’s Ncuti Gatwa will be the next Doctor Who. “I feel really happy that I can now talk about it because I got cast in February and I have been keeping it a secret since then,” the actor said on the red carpet. “So it is nice to finally breathe. But [I’m] also really nervous.”

Unless you’ve been living under a rock, you’ve probably been watching the hit original Netflix show Sex Education, which follows the students of Moordale High as they try to navigate dating, sex, and schoolwork. The charming and hilarious Gatwa totally steals the show as Eric Effiong.

Meanwhile, the actor also appeared on stage after studying at the Royal Conservatoire of Scotland. He played Demetrius in A Midsummer Night's Dream at Shakespeare's Globe Theatre. But he's not only a superb actor, he’s also led a really interesting life. Find out everything you need to know, below.

Where is Ncuti Gatwa from?

When Gatwa took to the red carpet and responded to his casting announcement, some were surprised at how much he didn’t sound like Eric from Sex Education. Many took to Twitter to voice their support of Gatwa’s Scottish accent, crossing their fingers that he’ll be able to keep it as the 14th Doctor.

Born in Kigali, Rwanda, Gatwa moved to Scotland when he was two-years-old. “I can’t imagine what it must have been like for my mum to come to Scotland in the UK, to a completely different culture, language… With, like, three kids on your back and nothing else,” the actor told Clara Amfo on her podcast about London entitled This City. “But I mean, we’ve got immigrant parents, we know that they’re heroes.” Gatwa was raised in Edinburgh and Dunfermline, after moving to Scotland due to conflict in his home country.

Although Gatwa admits Scotland wasn’t the easiest of places to grow up as a Black boy, and it was a culture shock for his family, he says his mum has fallen in love with the country. “Now, she’s so obsessed, like, she voted independence,” he said.

Who is Ncuti Gatwa Dating?

Elle previously linked the 29-year-old actor to London-based photographer Jessica Hardwick. But Gatwa maintains a low profile when it comes to his private life. Speaking to The Guardian, Gatwa remarked: “It gets tricky trying to handle your personal and your public life.” Recalling an experience when he lost a friend, the actor shared: “Obviously, bereavement is tough, but life goes on. You’re out and about in your normal day, and your brain isn’t the best place. And people still want that selfie, and they don’t know. You can’t put that on them.”

While the actor prefers his privacy, he has been very open in talking about his Sex Education character Eric’s love life. Speaking of Eric and his love interest Adam’s “toxic relationship,” Gatwa explained to E! that their connection is bittersweet. “I don’t know that they ever get the happy moment, because I think they’re constantly still trying to figure out themselves, and trying to figure out how to be themselves with each other.”

And as for fans who don’t necessarily agree with the relationship, Gatwa noted that “16-year-olds don’t make the best decisions for themselves,” and that “queer youth don’t have a blueprint for life.”

Where have we seen Ncuti Gatwa before?

Outside of Sex Education, Gatwa has starred in the BBC miniseries Stonemouth as Dougie and Horrible Histories: The Movie, Rotten Romans as Timidius. He voiced the character Valentin Manzi in the video game GRID Legends, and is set to appear alongside Sex Education co-star Emma Mackay in Greta Gerwig’s live-action adaptation of Barbie, starring Margot Robbie and Ryan Gosling in the lead roles of Barbie and Ken.

You can follow Gatwa on Instagram @ncutigatwa, where he keeps fans updated on his current work projects. He’s already posted teasers for both Doctor Who and Barbie, and we expect there’ll be more in the future.

More like this
Fabien Frankel Has History With 'Game Of Thrones' Emilia Clarke
By Sam Ramsden
The Sean Bean Intimacy Coordinator Controversy, Explained
By Sam Ramsden
Prince Charles Revealed What He *Really* Thinks Of 'The Crown'
By Sam Ramsden
Sean Bean’s Wife Starred In Your Favourite Childhood Show
By Sophie McEvoy
Get The Very Best Of Bustle/UK

This article was originally published on Jan. 28, 2020