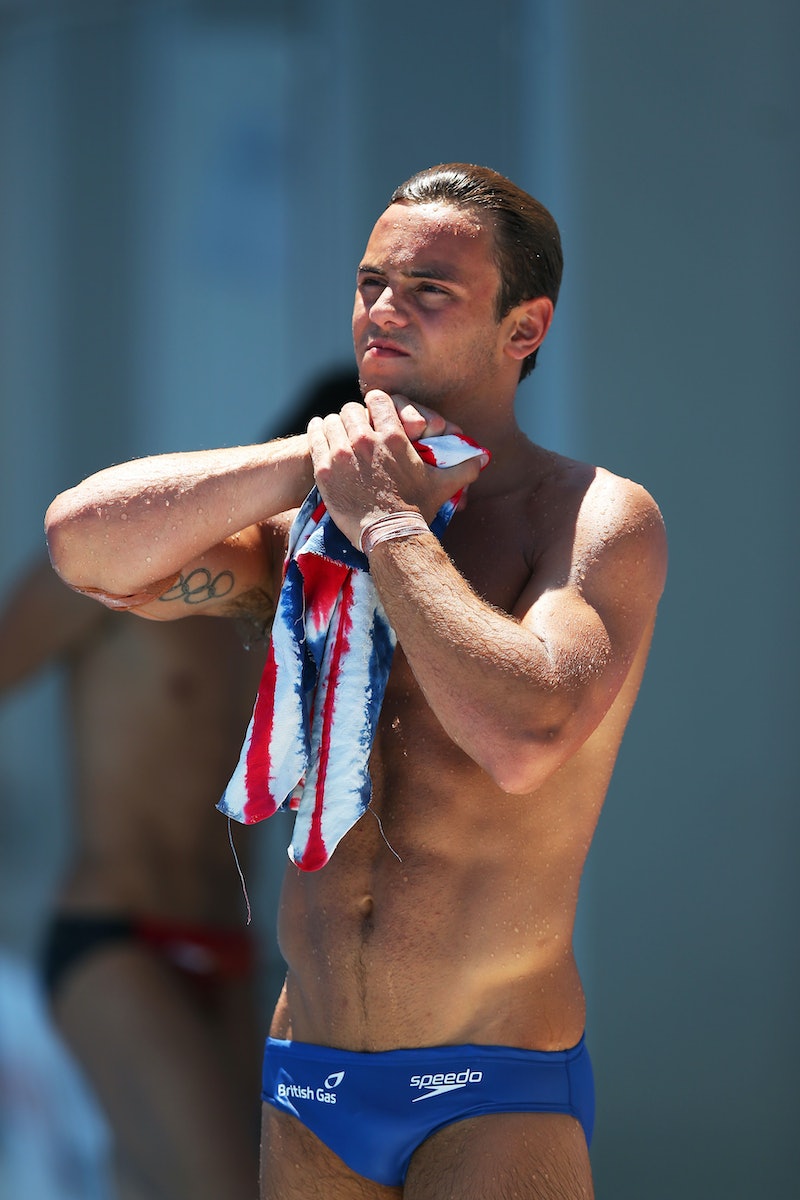 Back in 2005, when diver Tom Daley was 11 years old, he told the BBC, “I want to get to the Olympics and win a gold medal.” Now, 13 years and four Olympics later, he’s gone and done it. Winning the gold medal in the men’s synchronised 10m platform event with Matty Lee, saw Daley finally achieve his dream — a dream so important to him that he even has a tattoo to honour and celebrate it.

Watching Daley’s dives, you’ll have noticed that on his right bicep sits a tattoo of the five Olympic rings. Daley has lived and breathed the sporting event from a young age – speaking to the BBC he recalled going to great lengths to observe the diving events at Athens 2004. "We were on holiday in our caravan and everyone was going to the kids' clubs, but I was determined to stay in and watch the diving, so I was leaning out of the window with the aerial to try to get a better signal," he said.

Therefore, it’s really no surprise that his first tattoo was one directly related to the Olympics.

Daley got it inked in 2012, following his London Olympics success, where he won the bronze medal for the 10m men’s platform event. He got the tattoo together with fellow British divers Chris Mears and Sarah Burrow. At the time, Daley tweeted, “I finally have my Olympic tattoo… I will post a pic later!!!”

In another tweet, he revealed that the ink was approved by his mother Debbie, who had actually paid for the tattoo, as part of a gift to celebrate his 18th birthday. Daley posted: “Guess what my mum got me for my birthday?!?!...a voucher to go and get an Olympic tattoo after the games :O how cool is she?!” Aww, how sweet.

The tattoo has featured prominently in Daley’s many thirst traps on social media, but it’s the story behind it makes it all the more special. May the heartwarming Tom Daley content continue.

More like this
David Beckham’s Controversial Qatar Deal Skyrocketed His Net Worth
By Catharina Cheung
Maya Jama’s Net Worth Definitely Won’t Give You The Ick
By Sophie McEvoy
Twitter Is Saying The Same Thing About Beyoncé's Renaissance World Tour
By Shahed Ezaydi
Michaela Coel Has Some *Thoughts* About The Nepo Baby Discourse
By Maxine Harrison
Get The Very Best Of Bustle/UK
Sign up for Bustle UK's twice-weekly newsletter, featuring the latest must-watch TV, moving personal stories, and expert advice on the hottest viral buys.