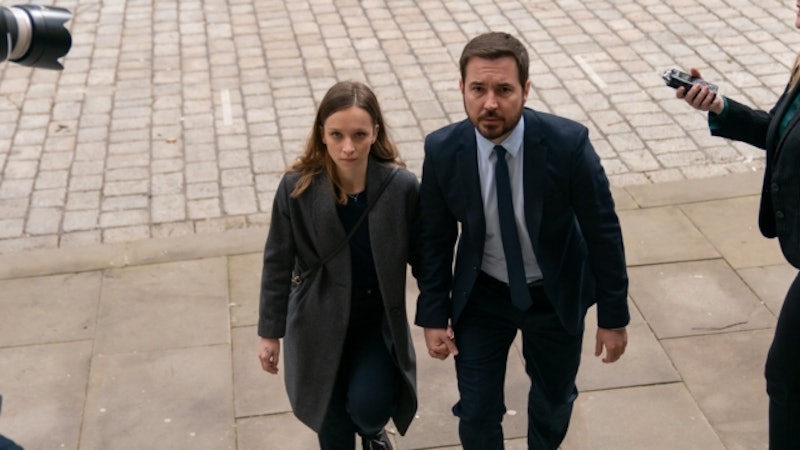 After a whirlwind first series, Alibi’s Traces has returned to our screens. Starring Molly Windsor and Line of Duty’s Martin Compston, Season 1 followed lab assistant Emma Hedges (Molly Windsor), as she returned to her childhood home. Starting a new job, she becomes entwined with a cold case involving the murder of her mother. In season 2, her relationship with Daniel (Martin Compston) becomes ever stranger, and she trains to become a forensic chemist.

Although season one was filmed in Dundee, this latest season was filmed across Bolton, Greater Manchester. As per The Bolton News, TV sets were spotted in the town centre in May. An array of well-known shows have been filmed in the local area, including Peaky Blinders, Last Tango In Halifax, The Stranger, It’s A Sin, and long-running ITV soap Coronation Street.

With season 2 involving a series of bomb plots, the Bolton filming spot was transformed into the aftermath of an explosion. Laura Fraser (Professor Sarah Gordon) and Michael Nardone (D.I. Neil McKinven) were both spotted wearing blue forensic suits, alongside the presence of emergency services.

Bolton councillor Hilary Fairclough told The Bolton News: “It is wonderful that Bolton is the place of choice for many dramas and, of course, Coronation Street. Bolton has a long history going back into the 1960s with films, including the Spring and Port Wine play and The Family Way.”

"We have such an interesting backdrop, and it certainly puts us on the map for all the right reasons."

More like this
'The Catch' Revisits A Famed Irish Filming Spot From 'The Tudors'
By Darshita Goyal
Olivia Colman Stars In First-Look Trailer For BBC's 'Great Expectations'
By Sabah Hussain and Sam Ramsden
Everything To Know About The 'Daisy Jones & The Six' TV Series
By Maxine Harrison and Brad Witter
10 Equally Romantic & Heartbreaking Books From British & Irish Authors
By Shahed Ezaydi
Get The Very Best Of Bustle/UK
Sign up for Bustle UK's twice-weekly newsletter, featuring the latest must-watch TV, moving personal stories, and expert advice on the hottest viral buys.