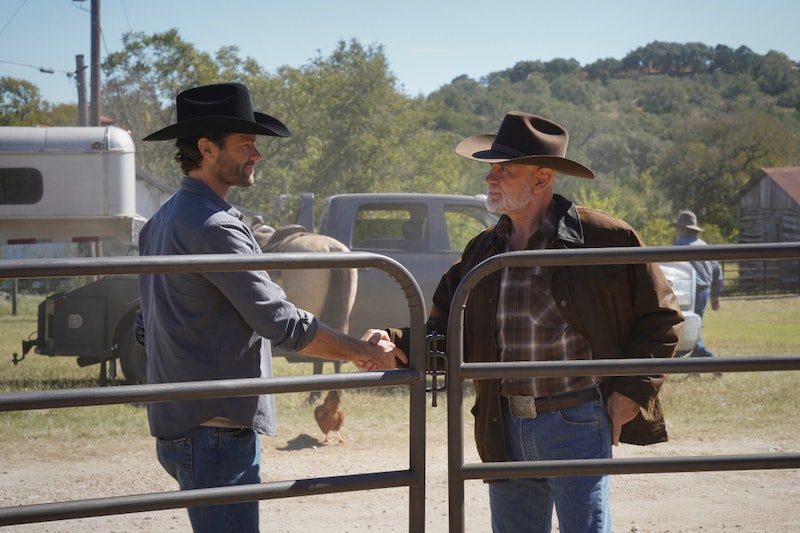 The CW's reboot of Walker, Texas Ranger, simply titled Walker, could easily give the original's Chuck Norris a cameo — the question is, does he want one? That's unclear. Jared Padalecki, who plays the new version's leading man Cordell Walker and executive produces the series, told Michael Rosenbaum of the Inside of You podcast that he doesn't know what Norris' "involvement will or won't be." But he confirmed that the show received Norris' "blessing."

“We had to get his blessing in order to create a new version of it,” the former Supernatural star explained, because he still co-owns rights to the story. Padalecki added hat he didn't talk to Norris personally. "He's 80-something now... I'm sure he could still beat my ass," he laughed.

While some fans are hoping for Norris to return, perhaps as Cordell's grandfather, it's worth noting that Walker is very different from the bad guy-chasing, action-packed show that Norris starred in. Instead, its focus is morality and family, as widower Cordell returns home to his two kids after working undercover for two years and realizes there's relationship mending to be done.

“The original [series] was this lawman who abides by his own rules, and he would just do head-spinning kicks on people, and obviously we can’t do that now; that would be laughably bad,” Padalecki explained. "So this version is less about what goes through somebody’s fists and feet, and more about what goes through somebody’s head and heart.” He added that he was "in no way interested" in leaning into toxically masculine tropes.

So far, Norris hasn't publicly commented on the reboot. But he is staying busy promoting his brand affiliations with World of Tanks, Total Gym, and Glock, Inc.