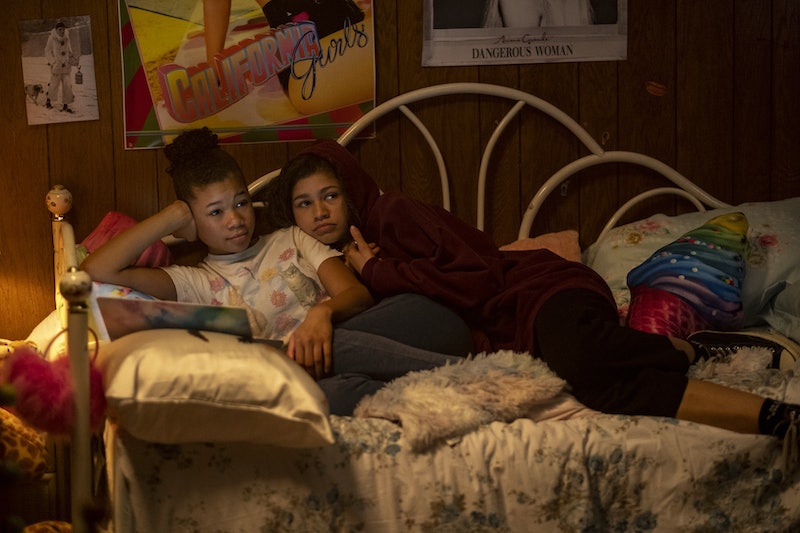 The finale of Euphoria's first season aired in August 2019, meaning fans have been waiting over a year for Season 2, which has no premiere date in sight thanks to the coronavius pandemic. Needless to say, fans are getting impatient, but they might get new episodes sooner than they originally thought. Zendaya teased a Euphoria quarantine episode during her appearance on Jimmy Kimmel Live! on Wednesday, Aug. 19, and it could be just the thing to keep fans going until Season 2.

Speaking to guest host Ben Platt, Zendaya revealed that the Euphoria cast and crew were trying to figure out how to make the Season 2 they envisioned safely. Their solution as of now is to potentially create a "little bridge episode" during quarantine to give fans something as a reward for waiting so patiently before fully diving into the second season. "I don’t really know how to describe it," she explained, "like an episode that we can do with a limited amount of people and in a safer environment that can kind of, I don’t know just give people something. Because we also miss Euphoria, as the people who create it, too."

However, if a quarantine episode happens, it wouldn't officially be part of Season 2, as the cast and crew would rather wait to film the second season as it was originally written than compromise on the quality of the show. "We’re kind of trying to figure out how to eventually be able to create a Season 2 that we’re all really proud of and get all the best out of it that we want, but also still being very safe," she told Platt.

Production on Euphoria Season 2 was halted in March thanks to the coronavirus pandemic, just as they were about to actually start filming. “We were headed into Season 2 and we had done table reads and wardrobe fittings and all kinds of things and then obviously everything happened and we got shut down, literally, like two days before we were about to start our first day of shooting," Zendaya said. "That was a bummer.”

As impatient as fans are getting, there's probably no one that wants to bring Euphoria back more than Zendaya, who told InStyle in a recent interview that she really missed being on set. "I do miss Rue," she said. "She's like my little sister in a lot of ways. And going back to that character is a home base for me." Neither HBO nor creator Sam Levinson have confirmed whether a "bridge" episode will actually happen, but should it get the green light, the possibilities are endless.