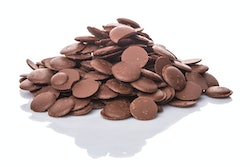 Some flavour combinations are just meant to be and when it comes to sweet milk chocolate with a hint of citrus, you really can't go wrong. So batten down the hatches and put the kettle on because Cadbury's new orange chocolate buttons and fingers are the ideal company your cuppa.

The brand spanking new range is currently available in Londis and Budgens stores and, according to a statement from the confectioners given to Delish, "will be available in One Stop stores from mid-August and in Tesco from September."

Fan might seem like a slightly extreme word to use when discussing chocolate but in all honesty people are going bonkers over Cadbury's new orange ranges, especially the return of the Twirl Orange. The latter was so hard to find that it became the Holy Grail of the sweets aisle. A recent announcement from Cadbury's that they would be relaunching the bar was accompanied by an actual presale link.

Although the first presale of 5000 bars is now over there's another chance to nab a pre order on Thursday Aug 20 at 12p.m.

Orange Twirls, Buttons and Fingers are the first time the UK's favourite chocolate brand has launched an orange chocolate product, introducing Cadbury Bournville Orange in 2019 as a new permanent fixture in their range. However, rather than an entirely new product, it was actually a reboot of a classic. According to Waitrose, the bar originally hit the shelves back in 1927. An oldie but a goodie, it's not only delicious but suitable for vegans too.