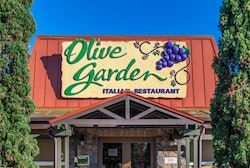 The Giant Chicken Parmigiana meal comes with the nearly foot-long chicken parmesan topped in marinara sauce and melted mozzarella cheese, as well as Olive Garden's classic fettuccine Alfredo on the side. It's almost enough food to make you skip out on the salad and breadsticks (key word being "almost," of course).

The meal is a whopping total of 1,780 calories and is priced at $19.49 — not bad for something bigger than your face.

While it's the chicken that's the star of the show in this plate, the Alfredo is still pretty good as well. So much so, that Olive Garden recently released an entirely Alfredo-based menu. And while the Giant Chicken Parmigiana isn't on it, it does feature almost all of your Alfredo-faves, including Chicken Alfredo, Fettuccine Alfredo, and Seafood Alfredo.

This "Amazing Alfredos!" menu, along with the Giant Chicken Parmigiana, can be delivered, picked up, or even served in-stores (with safety protocols in place, of course).

But who knows how long the giant fun will last? Your best bet is to head over to an Olive Garden ASAP and make your tall order.