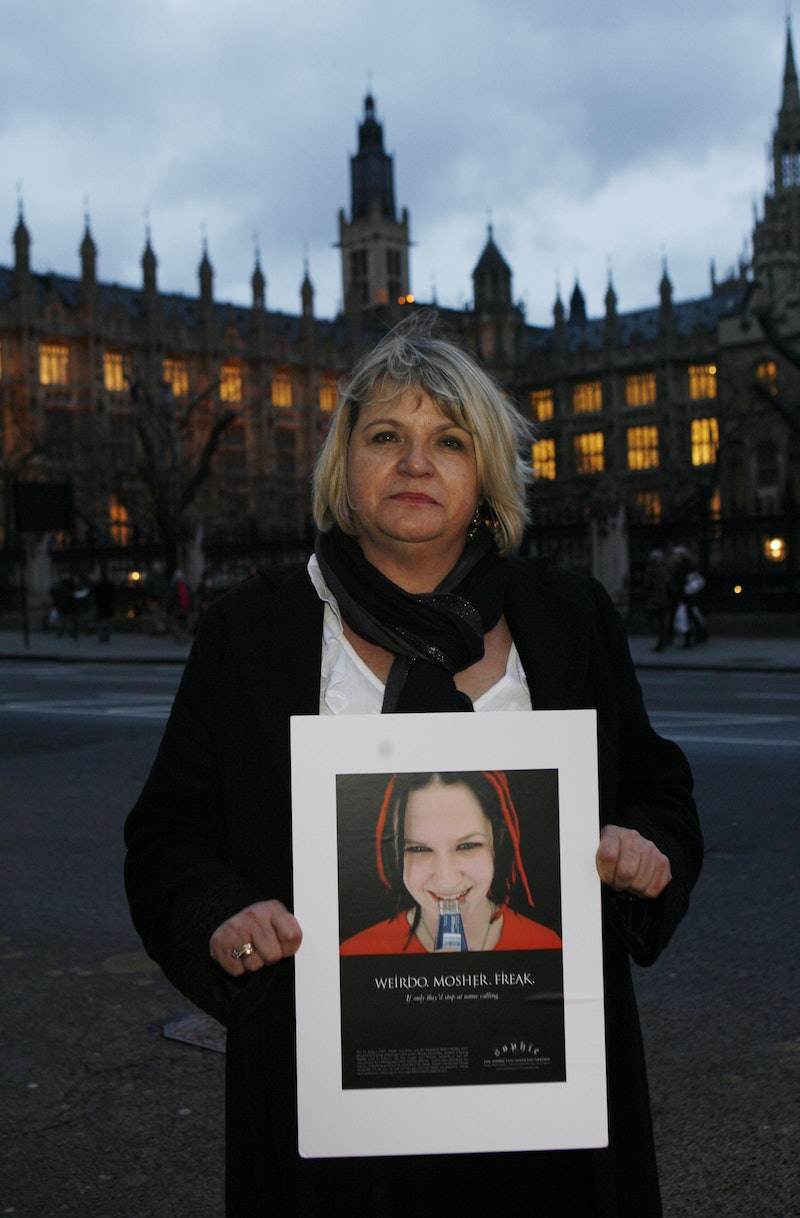 Sixteen years on from the murder of Sophie Lancaster, the UK’s Parole Board has ruled that one of her killers, Ryan Herbert, is eligible to be released from prison. Aged sixteen at the time, Herbert pled guilty for the unprovoked and violent attack, and was sentenced to life in prison. Lancaster and her boyfriend Robert Maltby were victims of a hate crime, and were targeted due to their choice of goth clothing. The murder prompted mass discussions within society about how people who don’t adopt to the status quo are treated. In 2017, BBC Three released a crime drama based on Lancaster’s death. Titled Murdered For Being Different, the hour-long film won a BAFTA TV award for Best Single Drama.

Who was Sophie Lancaster?

In 2007, Sophie Lancaster, 20, was walking through a Lancashire park with her boyfriend, art student Robert Maltby, when they were violently attacked. The couple, who were part of the goth subculture, were singled out by a group of teenage boys because of the way they were dressed. After fleeing the scene, their attackers celebrated and boasted of having beaten up two “moshers.” Both Lancaster and Maltby sustained serious head injuries from the attack, and were left in comas. An unresponsive Lancaster was placed on life support. Thirteen days later, Lancaster’s family made the agonising decision to remove her from life support.

Lancaster was on her gap year, and had plans to study an English degree at Accrington and Rossendale College. She was also a regular at Whitby’s annual Gothic Weekend. Following her death, various goth clubs around the country held nights to fundraise for a memorial bench in the seaside town. Whitby Gothic Weekend also dedicated their next festival — which Lancaster had attended three times — to her memory.

What happened to Sophie Lancaster’s murderers?

A year after the brutal attack, teenagers Ryan Herbert and Brendan Harris were sentenced to life imprisonment for the murder of Lancaster. They were also found guilty of assault causing grievous bodily harm with intent towards Maltby. In court, Detective Superintendent Mick Gradwell of Lancashire Police called it one of the most violent murders he had come across in his career, and in his closing remarks, the judge said the murder was an act of“feral” thuggery. “This was a terrible case which has shocked and outraged all who have heard about it,” he said. “At least wild animals, when they hunt in packs, have a legitimate reason for so doing, to obtain food. You have none, and your behaviour on that night degrades humanity itself".

Three other teenagers — brothers ​​Joseph and Danny Hulme, and Daniel Mallett — were also jailed, after being found guilty of grievous bodily harm with intent towards Maltby.

What is happening with Sophie Lancaster’s case now?

Due to making “exceptional progress" in prison, Ryan Herbert is now eligible for release, and the Parole Board (who assess whether prisoners can safely be released into the community) have decided that he can be released on licence; meaning that he’ll be subject to certain restrictions on where he travels and lives, and who he speaks to. The date of Herbert’s release has not yet been disclosed.

In a statement published following the ruling, Sophie Lancaster’s mum Sylvia wrote: “I’m obviously very disappointed in the result of the parole hearing. Once again we have a justice system that fails to deliver justice. However much progress people make in prison, they have been given their sentence in recognition of the extent of their crime.”

She added: “Sophie’s injuries were so severe, the paramedics attending the scene could not facially distinguish if she were male or female. How can you bear knowing the reality of the level of violence my daughter was subjected to, and stack that up against reducing the minimum tariff because they have done well in prison?”

“However they have progressed, the minimum justice for the family is them serving the sentence they were given. Her attackers may not have been given a life sentence, but I have.”

More like this
The UK Government Is *Finally* Banning Conversion Therapy
By Sophie McEvoy
Gen Z Are Twice As Likely To Identify As Queer, According To New Data
By Sam Ramsden
Here’s Where The NHS Nurses’ Strike Currently Stands
By Sophie McEvoy
What The UK Blocking Scotland’s Gender Recognition Bill Means
By Sam Ramsden
Get The Very Best Of Bustle/UK
Sign up for Bustle UK's twice-weekly newsletter, featuring the latest must-watch TV, moving personal stories, and expert advice on the hottest viral buys.